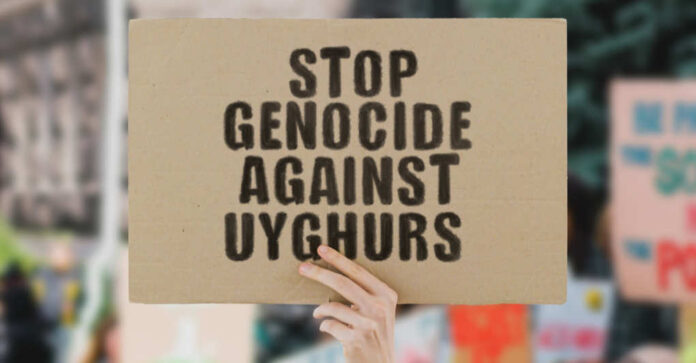 Slavery is alive and well in China. The very shirt on your back may have been stitched together by one of the roughly 1.8 million Uyghur Muslims being held in captivity.

When the Muslims aren’t piecing together products to be shipped to the Western world their time is consumed with rapes and beatings from the guards who consider them less than human. The U.S. has retaliated with strong sanctions against the Chinese but since they consider the practice fully acceptable, they’re going to retaliate back with “reciprocal countermeasures.”

Secretary of State Antony Blinken recently unleashed a new round of sanctions on the Chinese “who are believed to be responsible for, or complicit in, policies or actions aimed at repressing religious and spiritual practitioners, members of ethnic minority groups, dissidents, human rights defenders, journalists, labor organizers, civil society organizers, and peaceful protestors in China and beyond.”

“We again call on the PRC government to cease its acts of transnational repression, including attempting to silence Uyghur American activists and other Uyghur individuals serving the American people by denying exit permission to their family members in China.”

“The United States reaffirms its support for those who bravely speak out despite the threat of retaliation. We call on the PRC government to end its ongoing genocide and crimes against humanity in Xinjiang, repressive policies in Tibet, crackdown on fundamental freedoms in Hong Kong, and human rights violations and abuses, including violations of religious freedom, elsewhere in the country.”

When asked how they felt about the new sanctions and about what Blinken had accused them of, Chinese Foreign Ministry spokesperson Wang Wenbin said the action is “full of ideological bias and political lies.”

Wang then brought up how what China is doing pales in comparison to what the U.S. did to Native Americans and how our mishandling of COVID-19 had abandoned thousands of lower-income citizens due to “persistent and systemic racial discrimination.” So, nanny-nanny-boo-boo.

Most of the large internment camps are located in the province of Xinjiang where the majority of Uyghurs call home. Those not in captivity don’t have life any easier. They are relentlessly subjected to genocidal activity such as forced sterilizations, abortions, and snatching children from families to never be heard from again.

It isn’t just the Chinese government that detests the Uyghur’s existence. As with any repressed group, some Uyghurs have managed to escape the atrocities by attempting to blend in with Chinese society, but if discovered, especially on college campuses trying to gain an education… well… you wouldn’t want to be them.

Chinese state media said China is only trying to help the Uyghurs. The camps are not as they are being perceived. They are being used for job training and education and forcing labor upon the Uyghurs is in actuality a “poverty alleviation program” designed to teach them useful skills as part of a broader anti-terrorism effort.

So why did Wang feel the need to compare the Uyghur Muslim situation to the horrifying past dealt Native Americans by early U.S. settlers if what they are doing doesn’t even come close? Why did he say that what they’re doing pales in comparison if the internment camps are in actuality family fun centers?

Do those questions require an answer? Didn’t think so…