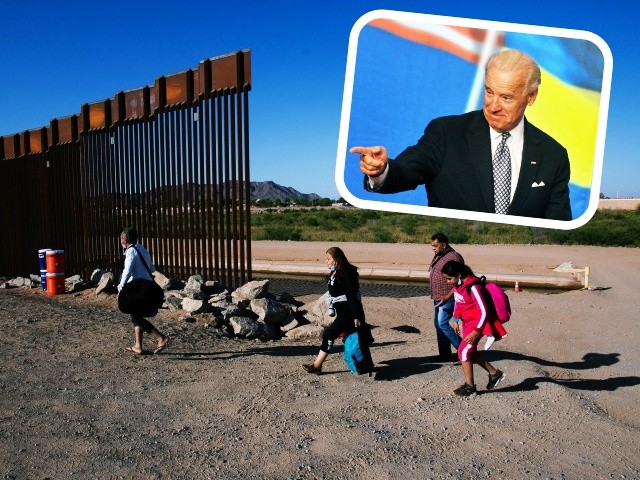 As part of the budget, Biden wants to spend $682 million on funding for Ukraine, which he touts as “an increase of $219 million above the 2021 enacted level, to continue to counter Russian malign influence and to meet emerging needs related to security, energy, cyber security issues, disinformation, macroeconomic stabilization, and civil society resilience.”

Meanwhile, Biden is seeking less than half of that — just $309 million in taxpayer funding — for “border security technology” at the U.S.-Mexico border while seeking $494 million to process border crossers and illegal aliens into the U.S. interior.

Immigrant families walk from Mexico through a gap in the border wall into the United States on December 10, 2021, in Yuma, Arizona. (John Moore/Getty Images)

As Breitbart News reported, Biden has already allocated to send nearly $14.4 billion to protect Ukraine’s borders even as he opposed the cost of former President Donald Trump’s construction of a border wall along the U.S.-Mexico border, which was estimated at about $15 billion.

As Biden focuses attention on Russia’s invasion of Ukraine, the U.S. sees its own invasion in which more than two million border crossers and illegal aliens arrived at the southern border last year — a record-setting figure of illegal immigration not seen before in American history.

Likewise, Biden has ensured that more than 530,000 border crossers and illegal aliens who arrived at the border last year were subsequently released into the U.S. interior. The figure is likely some hundreds of thousands higher, but the Department of Homeland Security (DHS) has refused to reveal the official total.

This year, experts are predicting that Biden will again set a new illegal immigration record with more than 2.1 million border crossers and illegal aliens expected to arrive at the U.S.-Mexico border. Hundreds of thousands of those arrivals are likely to be released into the U.S. interior.