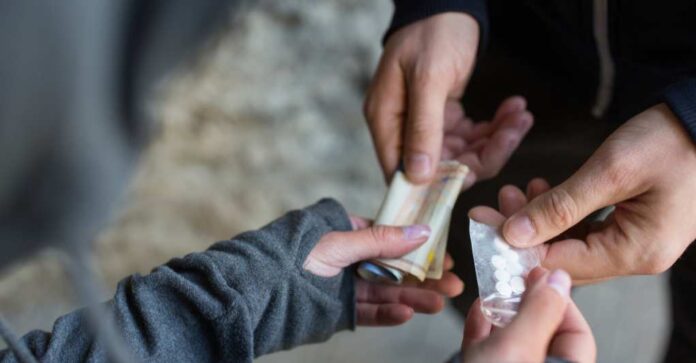 Look around. We have a drug problem in the United States. There are over 22 million people addicted to drugs of one kind or another. It includes everything from marijuana to cocaine to prescription painkillers.

Now, the U.S. is neither a large producer nor trafficker of drugs, so why do we have this kind of problem?

Well, the liberals certainly aren’t helping the situation. They’ve allowed illegal immigration to continue at the southern border, allowing more drugs than ever to enter our border. And with the introduction of fentanyl, it’s leading to more overdoses.

The liberals are also the ones who have pushed to legalize marijuana. It’s allowing people to assume that doing drugs is “no big deal” because the government is allowing it to happen.

And as the left tries to say that marijuana isn’t a gateway drug, it most certainly is. People enjoy the high they get from the THC. Then, they go in search of another drug that gives them an even bigger high.

The push to legalize more drugs in the U.S. isn’t stopping with marijuana, either.

Some states have chosen not to criminalize drug usage, including heroin and cocaine. This isn’t the same as legalizing it. Instead, they’ll simply turn a blind eye – and that’s leading to more people feeling as though they can use without any kind of legal repercussions.

While there may not be a legal reason not to use, it increases the number of drug addicts, the number of deaths due to drug overdoses, and more people on the streets who are in need of drug rehabilitation services.

With more liberals having success legalizing marijuana and decriminalizing the use of other illicit drugs, there’s a movement to legalize psychedelic substances, which includes “magic mushrooms.”

While other countries are looking to innovate and educate, the United States is looking to get everyone high. Exactly what is our plan, here? We can’t possibly think that it’s okay to shove more drugs into the American people…

And yet, liberals plan to do just that. They want to destigmatize the use of marijuana and other drugs – and they’ll make it a political power play in the process. It’s their way of appealing to drug users across the country. Vote for us, we’ll let you do drugs.

It’s disgusting when you think about it.

Issues that were taboo a decade ago are suddenly the hot topics of bills being passed by Democrats in blue cities and states.

Some of the bills want to look at the medical aspects of certain drugs. Others want to study the benefits of psychedelics.

Washington state senator Jesse Salomon (Democrat) is in the process of sponsoring a bill that would allow psilocybin use for adults over the age of 21, under supervision. He commented, “It’s gone viral and sparked an interest nationwide. I just didn’t know there were so many like-minded people on this.”