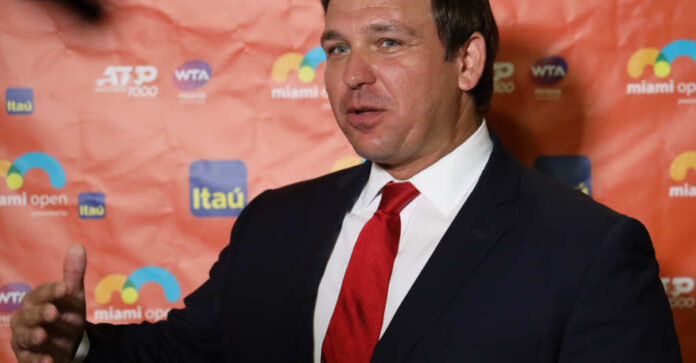 Ron DeSantis, the popular Republican governor of Florida, recently made waves nationally by signing into law HB 1557, legislation that bans classroom discussions of gender identity and sexual orientation for children in Kindergarten through third grade.

A spokesperson for the governor said this week that President Joe Biden and his White House administration are choosing to give a “false narrative” about the Florida bill because they are afraid to publicly advocate for “transgenderism in kindergarten.”

President Biden and Miguel Cardona, Biden’s secretary of education, spoke about the bill that keeps dialogue about these issues out of the classrooms of children ages 5 to 9.

The Biden administration vowed to “protect” LGBTQ youth and they also threatened to get the Office of Civil Rights involved if a single child impacted by this new bill feels that they have been discriminated against.

Christina Pushaw, the press secretary for DeSantis, reinforced a statement that Governor DeSantis made at a press conference this week.

“As Governor DeSantis said today, many high-profile critics of HB 1557 have read the legislation – but they intentionally mislead people about what it says. President Biden knows full well that the law Governor DeSantis signed today will protect parents’ rights and ensure young children in grades K-3 are not exposed to inappropriate sexual content or gender ideology in the classroom,” she said.

Pushaw went further saying that Biden and other Democrat politicians should understand what most “sane people, including their own voters,” understand. They support these common-sense protections. She then made the case that Biden and his progressive friends are “afraid” to advocate for radically progressive positions when the national spotlight is on them. She questioned why they did not just openly advocate for transgenderism in kindergarten and why do they need to fabricate a false narrative about Florida’s law.

Pushaw asked, “Why doesn’t Biden just say what he believes: that it’s good to instruct young children about changing their gender, while hiding it from their parents?”

The fact is that the White House would not answer questions from some media regarding whether or not the president supported sexual orientation and gender identity discussion for children ages 5-9.

The Florida law signed by the governor boldly says that classroom instruction by school personnel or third parties that focus on sexual orientation or gender identity are not age-appropriate or developmentally appropriate for children in kindergarten through third grade. The law states that it is in accordance with state standards.

But those who oppose the bill misrepresent it by calling it the “Don’t Say Gay” legislation, even though the bill never uses the word “gay.”

The one word that is very present in the bill is “parent.” It occurs 32 times with “parental” occurring eight more times. Thus, the bill has a strong focus on parental notification and parental awareness of what is being delivered in the classroom to their children.

This is where the rub seems to be with the left, parents standing up for their right to know what is happening in the classroom with their young children.

Governor DeSantis declared this week that parents have a “fundamental” role in the education and care of their children. He said that he will “never cave to pressure” from outside groups. This was a stab and the pressure that Disney is now putting on Florida’s government.

DeSantis has the majority on his side on this issue. Recent polls show that most Americans do not want gender identity being taught in schools. The governor let people know that people in Hollywood and entertainment are opposed to giving parents their rights in the education of their children. But those same Hollywood elites “held up degenerates like Harvey Weinstein as exemplars.” He said that he wears their opposition to parents rights “like a badge of honor.”