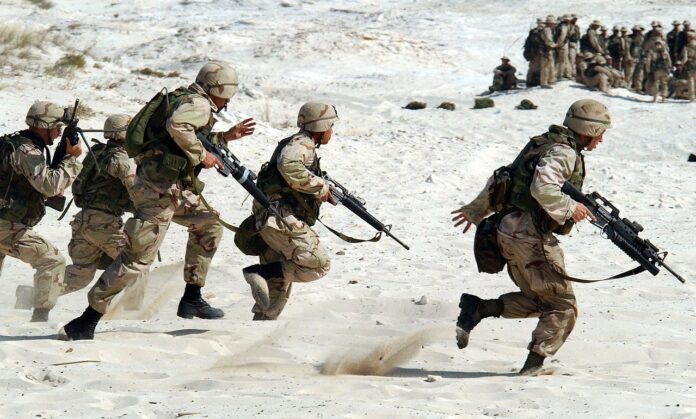 The First Amendment means nothing under the Biden Administration.

To the Left, every word is a “trigger,” “unconscious bias,” “not anti-racist enough” and other forms of “subliminal racism” that “perpetuate the white male patriarchy.” Now the Left has upped the ante, and they have expanded their ideological dragnet to include white women, who must be equally punished for the color of their skin.

The Democrats want to create a world where EVERYTHING you say is a cause for cancelation — and by that I don’t mean your magazine subscription, but your basic right to existence.

Forget about winning wars and protecting the homeland. Joe Biden is more concerned about re-educating the United States military in line with its Woke Agenda.

One would think that the Biden administration should be more concerned with monitoring Chinese Communist Party propaganda or terrorists on social media. Just whose side is the Radical Left on?

The Pentagon will “continuously” track U.S. military personnel for “concerning behaviors,” according to a late March Pentagon briefing. Given that everything seems to be “concerning” to the New Woke Left, the U.S. military is going to grind to a standstill halt.

Meanwhile, Hamas is pummeling Israel, China is building islands in Philippines’ territorial waters, Russia has more troops in Ukraine than anytime since the Soviet Union, and Iran is gassing up is nuclear program again.

Are Republicans in Congress going to fight back? When reporters asked Republican Don Bacon, a member of the House Armed Services Committee, he claimed he was not aware of the program.

“I have discussed this with our defense team and as of right now, we have not heard anything from DoD that would confirm this story,” said Abbey Schieffer, Bacon’s press secretary.

How far off base is Joe Biden with his radical cancel culture military purge? The Senate Armed Services Committee is showing their concern, both in terms of how this agenda will affect military readiness and how it may infringe on military members’ First Amendment rights.

“The Committee understands that the Department of Defense is exploring a means of implementing social media screening in conjunction with background investigations. We anticipate that any social media screening would be intended only as an additional means of vetting cleared individuals or those seeking to obtain a security clearance, not as a tool for ongoing surveillance of all men and women in uniform.”

The Senate Armed Services Committee continued, “That said, Secretary Austin has been clear about his intentions to understand to what extent extremism exists in the force and its effect on good order and discipline. We look forward to hearing the results of the stand down and the Department’s plan to move forward.”

Under past Commander in Chief’s, the U.S. military has refused to invasively surveil American service members due to First Amendment free speech protections.

The Radical Left socialist Biden administration doesn’t believe in the First Amendment and they are ignoring restrictions on the government by contracting a private firm to conduct the surveillance for them.

There is only one winner in all of this: America’s enemies.

China and the terrorists are cheering right now.