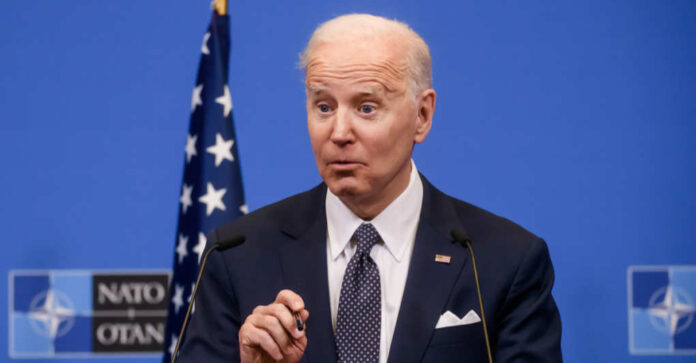 Joe Biden is the master at reading his speeches and looking at notecards to help keep his thoughts straight. He has lost the ability to think independently and provide answers that make sense. The president’s advisors are going out of their way to keep him from making a spectacle of himself. But he is making ignorant statements so fast that they cannot keep up with him.

The president’s health is a significant concern and has become a liability to the country. The reporters asking the questions must make sure that they ask only what is on the president’s notecard. Any deviation from the card will cause his mind to wander and send him down a path from which he will never recover.

Biden said, “For God’s sake, this man cannot remain in power.” The media did not know how to handle his statement because he gave no meaning or direction for what he was talking about. It would have been easy to claim that he was talking about war, but that would be inconsistent with Biden’s weak presence within the international community.

The president’s staff came up with a notecard that would help the president clarify what he meant by his confusing statement. They listed on the card the question that the reporter would ask and gave him two answers that would clarify everything. And, of course, the answers would be based on feeling and policy and nothing more. There would be no direction provided as to how the president would move forward with helping the Ukrainian people.

The White House staff even went one step further and issued its statement if the president messed up the notecard response. The Daily Wire reported that the statement claimed, “The President’s point was that Putin could not be allowed to exercise power over his neighbors or the region. He was not discussing Putin’s power in Russia or regime change.”

It is always a game of politics with the Democrats. The statement tried to rationalize two things related to the war. They wanted people to think that Biden believes that Putin is in error for the war and that Biden does not have the right to dictate who gets to stay in power in Russia. The response was another fancy disclaimer pointing out that they are not going to do a thing about Putin killing people.

The notecard also had a part on it that dealt with NATO. Biden was to clarify that the war is not destroying NATO even though two of the major players, Russia and China, both love the war. There is a conflict of interest anytime significant players are involved in the matter at hand. And in this case, the war is splitting alliances. But Biden was told by notecard to make it seem like everyone was in unison with the war.

The sad reality behind the notecard is that Biden is not well mentally. He has to be constantly told what to say and how to present it. The reporters have to ask questions prepared beforehand to make people think that the president has it together.

The country would love to retire the old man, but his replacement is worse. Therefore, Kamala Harris has no experience and no right to sit in the Oval Office. She has not completed one task that Biden has given her. She treats her staff like trash. And she thinks of herself as a piece of royalty that everyone must acknowledge the moment she walks into the room.

The nation sits in peril as other leaders worldwide look down on the current administration. Even if there were a way to get rid of Kamala Harris, the country would still be in trouble because Nancy Pelosi would move up into the Oval Office.

The amount of embarrassment that the president brings to the country is devastating. The world looks down on the greatest nation that has ever existed because of the insanity of one man and his staff.