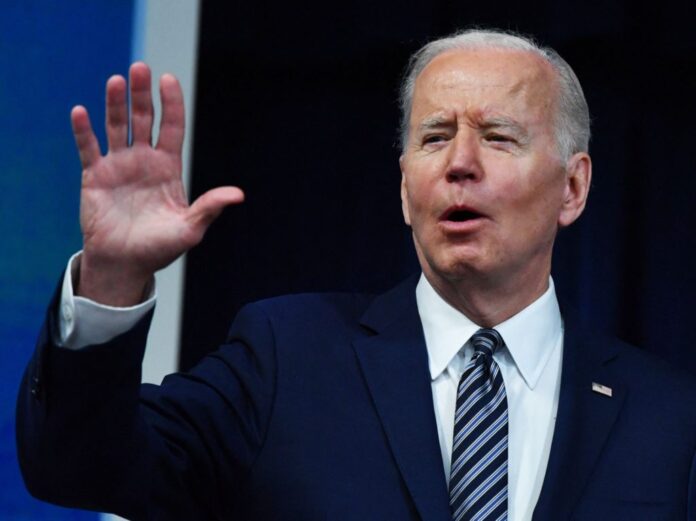 I want you to know that your President sees you. Joe, Kamala, Doug, our entire administration, sees you for who you are … deserving of dignity, respect, and support. But we know it’s hard when there are those out there who don’t see you, don’t respect you.

Biden also threatened the loving American parents who disagree with their teenagers’ claims to be members of the opposite sex, saying:

To parents of transgender children, affirming your child’s [claimed transgender] identity [is] one of the most powerful things you can do to keep them safe and healthy.

The claimed threat to the children was underlined by Amy Schneider, a man who decorated his claim to be a woman by wearing a pink suit during his same-day visit to the White House. In a meeting with White House reporters, Schneider denounced the popular child-protection laws now being passed by GOP legislatures, saying the laws:

Numerous polls show Biden’s transgender pitch is very unpopular, especially when aimed at children. For example, a March 23-24 poll by Harvard CAPS/Harris showed that only 33 percent of 1,990 registered voters believe that “information about sexuality should be taught in schools at kindergarten through third grade levels.” Sixty-seven percent say the topic should be “left to parents to discuss with their young children.”

Also, many of the young people who claim to be transgender “de-transition” from their claims, but the reversal often comes after they suffer voice-changing, debilitating, and sterilizing transgender treatments.

In the last two years, several European countries have reversed the legality of transgender treatments, usually after the discovery of much harm to teenagers and young adults:

Ironically, Biden’s “White House’s Day of Transgender Visibility” speech was scheduled for the same day as a “White House Roundtable on Mental Health with Young Women and Girl Leaders.”

The White House’s message to the media after the March 31 event said:

With studies continuing to highlight the toll that the COVID-19 pandemic has taken on youth mental health, participants shared their experiences and insight into the unique mental health challenges that women and girls face. The young women leaders also shared policy recommendations for strengthening mental health for girls, including the need to meet girls where they are …

Senior White House officials reinforced the Administration’s commitment to addressing our mental health crisis, a core pillar of the Unity Agenda that President Biden outlined in his State of the Union Address.

Child abuse crosses all socioeconomic and educational levels, religions, and ethnic and cultural backgrounds. We know that abuse and neglect negatively impact every aspect and stage of a child’s life. Child abuse impacts the ability of students to succeed in school and often hinders their ability to forge healthy relationships with their loved ones and peers.

In December 2021, Schneider, the pink-clad man whose inner feelings of “gender identity” are said to be female, told an interviewer that his favorite movies include “Master and Commander” and “Fury Road.”

The transgender movement is diverse, with competing goals and priorities.

It includes non-political people trying to live as idealized stereotypes of the opposite sex and pre-pubescent children with childish views of sexuality.

It also includes sexual liberationists and many progressives who are eager to liberate people from their bodies, parents who are eager or willing to endorse transgender claims, and journalists eager to help their social peers.

It does not include young people trying to “de-transition” back to their sex, nor the alienated teenagers who are being guarded by their loving parents from the transgender activists.