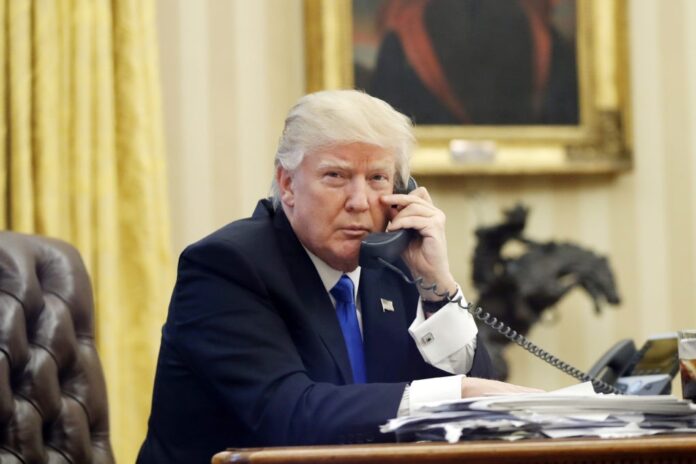 Documents turned over to the United States House Select Committee on the January 6 Attack, and then leaked to the media, suggested that there was a gap that could have been caused by President Donald Trump or his aides suppressing information.

“A 7-hour gap in Trump’s calls evokes a missing spot on Nixon’s tapes,” the Washington Post reported breathlessly, recalling the 18-minute gap in President Richard Nixon’s White House tapes that ultimately led him to resign his presidency in 1974.

In another bid for the “Worse than Watergate” files, it turns out there is a seven-hour gap in Donald Trump’s phone logs on the day of the insurrection attempt. According to documents obtained by The Post and CBS News, there is no record of then-President Trump’s calls on Jan. 6, 2021, from just after 11 a.m. to shortly before 7 p.m.

That means there’s a big black hole in the record when it comes to Trump’s conversations throughout the period during which the mob assaulted the U.S. Capitol and violence raged over several hours.

The documents, which were turned over to the House select committee examining Jan. 6, do show that Trump had many calls before 11 a.m. and after 6 p.m. that were apparently related to the coup effort. That suggests Trump held many calls related to the insurrection between those two times that are not officially accounted for.

Sargent speculated that the reluctance of Trump aides to cooperate with the one-sided January 6 probe added fuel to the story.

But it turns out to have been something of a hoax. As CNN reported on Thursday evening, citing a source inside the January 6 investigation, there were no missing pages in the switchboard logs and that there was a more likely, innocent explanation.

In its story on the phone logs, CNN — using six reporters — reported that the so-called gap was not, in fact, unusual:

The mystery of the seven-hour gap has fueled furious speculation as to why calls are missing. That includes allegations that Trump was using “burner phones” (which he has denied) or that the logs were purposely suppressed.

But the gap might have a less mysterious explanation.

According to multiple sources familiar with Trump’s phone behavior and the White House switchboard records, the January 6 log reflects Trump’s typical phone habits. He mainly placed calls through the switchboard when he was in the residence but rarely used it when he was in the Oval Office. The fact the log does not show calls on January 6, 2021, from the Oval Office is not unusual, said the sources, because Trump typically had staff either place calls directly for him on landlines or cell phones. Those calls would not be noted on the switchboard log.

CNN also noted, citing a former aide to President Barack Obama, that Obama’s calls were also frequently not in the record.

Thus, despite the Post‘s suggestion that the “gap” was “worse than Watergate,” the story seems to have ended the same way other “worst than Watergate” hoaxes about Trump, like the “Russia collusion” conspiracy theory, have ended: by being debunked.

Despite puncturing the bubble about the seven-hour gap, CNN still began its article by reminding readers that Trump phoned Vice President Mike Pence that day, noting that the call is not in the records — perhaps because it was made by cell phone.