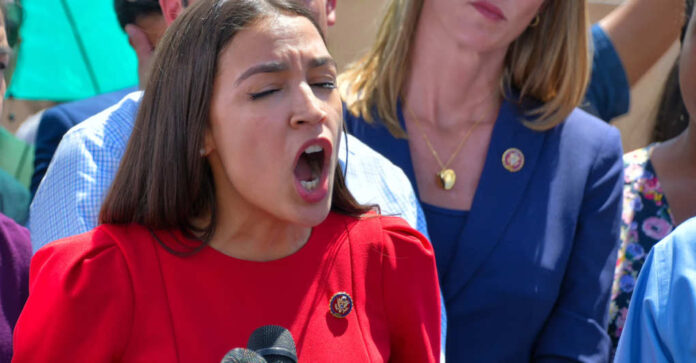 The Democratic Party has moved from having a political focus to a realm of believing that they are a type of royalty that needs to be worshipped. They love the fame and drama of being called a Democrat. But in all the pompous fame and popularity that they seek, they have lost the ability to enact real change to keep America pointed and moving in the right direction.

The alarming reality that the Democrats are facing with the upcoming midterm election is that they have disconnected themselves from the country. They have set themselves up so high that they think they can live above the law and ignore the commoners who voted for them. But with the country sitting in a vulnerable spot and a Democratic president refusing to do anything about attention has turned to replacing the liberals with conservatives that are willing to protect America and work for the people.

Alexandria Ocasio-Cortez is paranoid that the future of her beloved party is in jeopardy. She has come out of the shadows again to acknowledge that the party will lose in the looming election and find that their base has shifted over to the Republican side.

AOC was part of an interview with New York Magazine. The Daily Wire found and reported that “Ocasio-Cortez made the remarks in an interview with New York Magazine. The discussion included AOC’s claims that ‘senior members of Congress, who have been around in different political times’ want to work in a ‘buddy-buddy and backslapping’ political system where ‘we’ll cut a deal and go into a room with some bourbon and some smoke and you’ll come out and work something out.’”

The Democrats believe they live above reality and in a world where they are the favored elite that everyone loves and wants to be like. But with people living in poverty and being treated like scum by the Democrats, they are ready for a leadership change. The nastiness of Joe Biden and the rest of liberal cancer has made its debut, and people are ready to cut it all out to save America.

AOC stated that “I think there’s a real nostalgia and belief that that time still exists or that we can get back to that,” she claimed. “We need to acknowledge that this isn’t just about middle of the road, an increasingly narrow band of independent voters. This is really about the collapse of support among young people, among the Democratic base, who are feeling that they worked overtime to get this president elected and aren’t necessarily being seen.”

Even her observations are flawed in that she thinks the base is deserting because their voice is not being heard. But their voice is being heard but not in a way that they like. The liberals have ignored the base and are off doing their own thing, which has led to many of their long-time supporters jumping ship and joining up with the conservatives.

AOC is also blind to what the country wants for the future. She maintains that Joe Biden needs to adopt her rejected progressive plan to stay popular. She has missed the point that the American people have rejected that way of living, and that is why the red wave threatens to destroy the Democratic Party as it is known today.

She wants the president to abuse his executive authority and issue changes to give him what he wants in the Build Back Better bill that was struck down earlier in the year. Her idea is not only absurd but goes against everything the Constitution stands for.

The Democrats have lost control of the country because of the way they see themselves as royalty living in a dream world. They will get a reality check when votes are cast, and people are forced to pack up and leave Washington because of their failures as Democrats.

AOC has a lot of reasons why her party is in trouble. But she fails to understand that she is a big part of the problem and needs to stay in the shadows.