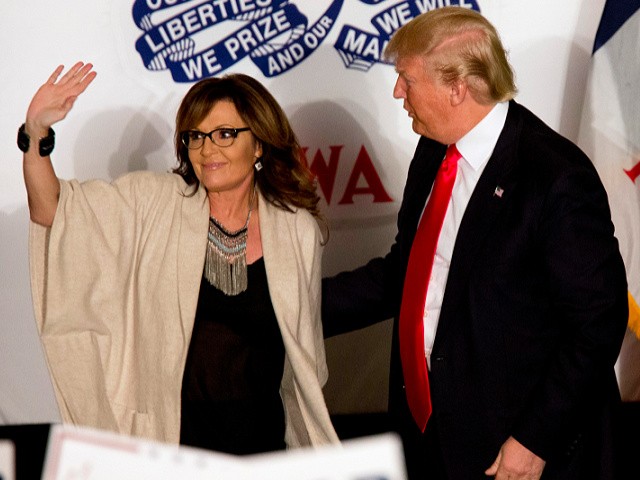 Hailing the former Alaska governor as a “wonderful patriot,” Donald Trump praised Palin for her persistence in the face of the Democrats’ attacks on her.

“Wonderful patriot Sarah Palin of Alaska just announced that she is running for Congress, and that means there will be a true America First fighter on the ballot to replace the late and legendary Congressman Don Young,” said Trump.

Sarah Palin notably endorsed Trump very early in the 2016 primaries. “We are ready for a change. We are ready and our troops deserve the best, a new Commander-in-Chief whose track record of success has proven he is the master at ‘The Art of the Deal,'” she said.

In his endorsement, Trump recalled how Palin elevated the 2008 McCain campaign as the media and establishment Republicans sabotaged her.

“Sarah lifted the McCain presidential campaign out of the dumps despite the fact that she had to endure some very evil, stupid, and jealous people within the campaign itself,” he said. “They were out to destroy her, but she didn’t let that happen.”

“Sarah Palin is tough and smart and will never back down, and I am proud to give her my Complete and Total Endorsement and encourage all Republicans to unite behind this wonderful person and her campaign to put America First!” he concluded.

Sarah Palin announced her run for congress this past Friday to fill the seat left vacant by the late Don Young, citing the economic devastations of the Biden era:

America is at a tipping point. As I’ve watched the far left destroy the country, I knew I had to step up and join the fight. The people of the great State of Alaska, like others all over the country, are struggling with out-of-control inflation, empty shelves, and gas prices that are among the highest in the world. We need energy security for this country, and Alaska can help provide that – but only if the federal government gets out of the way and lets the free market do what it does best.

“At this critical time in our nation’s history, we need leaders who will combat the left’s socialist, big-government, America-last agenda,” Palin said.

“This country was built by heroes, and the radical left dishonors their legacies by opening our borders to illegal immigrants, mortgaging our children’s future, and selling out our nation’s interests to the highest bidder,” she added.