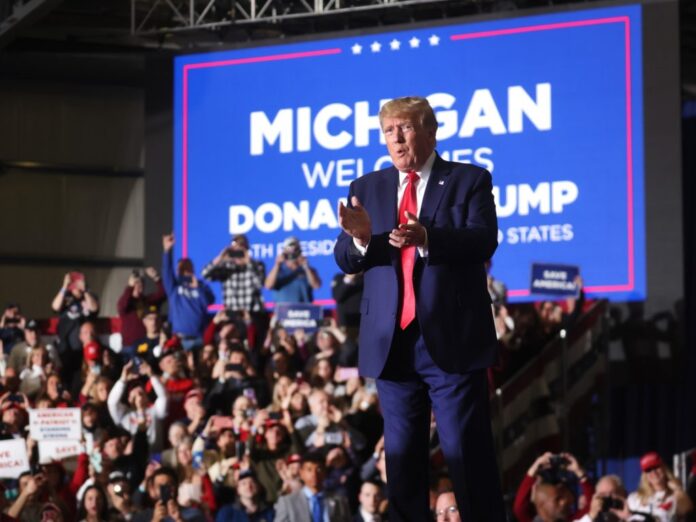 “The Democrat Party is waging war on reality, war on science, war on children, war on women,” he said as the crowd roared with applause, adding:

The Republican Party is now the party of American women and American children and we will protect women in sports — women in sports! — and not allow men to enter into the women’s games.

The audience reaction and Trump’s comments demonstrate the growing pressure by GOP voters on its leaders to push back against the Democrats’ aggressive promotion of the transgender ideology.

The ideology demands the federal government outlaw civic recognition that men and women are different, it encourages children to use drugs and surgeries to mimic the appearance of the opposite sex, and it encourages men to enter womens’ sports competitions.

Trump made his claim almost 80 minutes into the speech, and was rewarded with waves of loud applause from the crowd:

As President, I was proud to issue the world’s first ban on Critical Race Theory. Joe Biden rescinded that order — immediately! — but when we retake Congress, Republicans must ban critical race theory in our schools, ban it in our military, and ban it in every part of our federal, state, and local governments.

Furthermore, America’s moms and dads must be given a veto over anyone teaching far-left gender theories to their children in school without parental consent. It’s unbelievable.

Can you imagine a child, and then they grow up and they say, “Why the hell did you do that to me, mom or dad — or government?”

Biden’s Department of Justice has also announced they will punish medical doctors who refuse to perform irreversible and highly controversial transgender procedures. I can’t even believe it. Who the hell would have ever believed we’d be talking about this stuff, right? Who would believe it?

With their extremist sex and gender ideology, the Democrat Party is waging war on reality, war on science, war on children, war on women.

Trump and the establishment GOP have been slow to respond to the fast-moving transgender ideology, evidently because of intense back-room pressure from woke investors and executives, including executives at Apple and Disney.

But the establishment wing of the GOP is reluctantly moving toward the voters on the emotional issue, partly because the poll numbers show deep opposition from the GOP voters. For example, two out of three Americans say that men should be excluded from women’s sports competitions, according to a March 25-28 poll of 1,000 registered by Public Opinion Strategies.

The issue can help the GOP win many Democrat-leaning women who are appalled by the loss of women’s private spaces and public awards to the tiny minority of aggressive men who say they are transgender. Less than 1 percent of the population claims to be transgender.

“There have to be some edits to the Equality Act, or to Title IX, that will preserve protect sex segregation and sport based on science and biology,” said Nancy Nancy Hogshead-Makar, an athlete, lawyer, and a Democrat who helps to run the Women’s Sports Policy Working Group.

But she declined to say if her wide-ranging group would take the next step of endorsing or criticizing political candidates. She said:

“[Male swimmer] Lia Thomas was a turning point for people to hear from their constituents that they didn’t hear before. People recognize what’s at stake with Title IX [laws on womens’ sports]. This is the 50th anniversary of Title IX, and there are some rights that need to stay sex-based — meaning biology-based — not gender-identity based.”

The Democratic-backed transgender ideology attacks the social status and legal rights of women because it subordinates their biology-based rights to novel rights based on each person’s fleeting sense of “gender identity.”

The Human Rights Council defines “Gender Identity” as unmeasured, undetectable, unprovable feelings: “One’s innermost concept of self as male, female, a blend of both or neither – how individuals perceive themselves and what they call themselves. One’s gender identity can be the same or different from their sex assigned at birth.”

Trump’s defense of biology-based rights for women and girls is very different from President Joe Biden’s promotion of the gender ideology.

On March 31, for example, Biden told parents they should trust claims by teenagers who say they were born in the wrong body; “Affirming your child’s [claimed transgender] identity [is] one of the most powerful things you can do to keep them safe and healthy.”