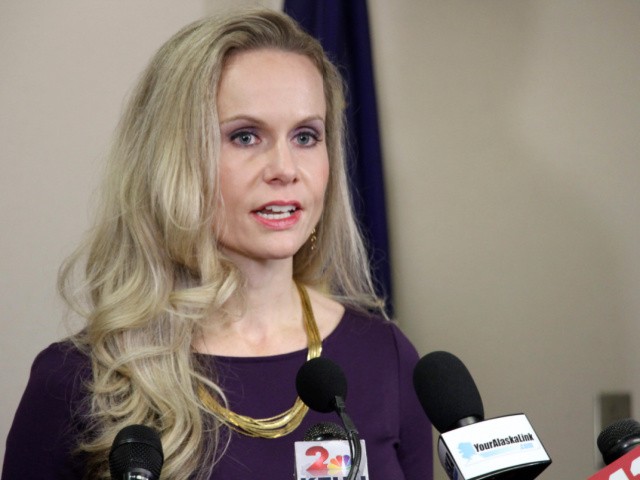 “The long guessing game is over, and the unsurprising answer is that Lisa Murkowski is supporting a leftist judicial nominee who will write legislation from the bench and have the very real potential for harming Alaska for decades to come,” Tshibaka said in a statement on Monday.

Tshibaka called out Murkowski for pledging to vote “Yes” on Joe Biden’s Supreme Court pick after voting “No” to confirm Justice Brett Kavanaugh and voting “No” on the motion to proceed with Justice Amy Coney Barret.

Judge Ketanji Brown Jackson will have Murkowski’s vote, which is far more than solid conservative Justice Brett Kavanaugh ever got. In fact, Murkowski’s vote to discharge the Judiciary Committee and put Judge Jackson’s nomination before the full Senate is more respect than she gave Justice Amy Coney Barrett, whose very nomination she opposed in the first place.

Indeed, while Murkowski eventually voted “Yes” to confirm Justice Amy Coney Barrett, she initially voted “No” on the motion to proceed after Barrett exited the Senate Judiciary Committee.

“I voted no on the motion to proceed yesterday because I have stated on multiple occasions since 2016 I do not believe the Senate should take up a Supreme Court nomination this close to a presidential election. I have been clear in that position throughout this process. With that vote, my view did not prevail,” she explained at the time.

Tshibaka said in her statement that Murkowski has repeatedly failed her home state of Alaska by voting for Joe Biden’s nominees almost 90 percent of the time, including Ketanji Brown Jackson, who “has been lenient on child sex abusers, cannot define what a woman is, and does not acknowledge the natural rights of people as delineated in the Declaration of Independence.”

“Lisa Murkowski has failed Alaska yet again, apparently calculating that there’s more political benefit in pleasing the D.C. insiders and catering to the radical left than there is in protecting her own constituents,” concluded Tshibaka. “When I’m the next senator from Alaska, I won’t make people wait for my decisions, and I will always support only strong, conservative constitutionalist nominees.”

As Breitbart News recently reported, the latest polls have put Tshibaka in the lead to replace Murkowski in the upcoming Alaskan primary.

“Conducted from March 14 to March 16, the survey of 500 likely voters in Alaska’s November general election found Tshibaka in the first round with a huge lead of more than double digits over Murkowski,” said the report. “On that first choice on the ballot, Tshibaka comes in with 45.4 percent and Murkowski at just 28.7 percent.”