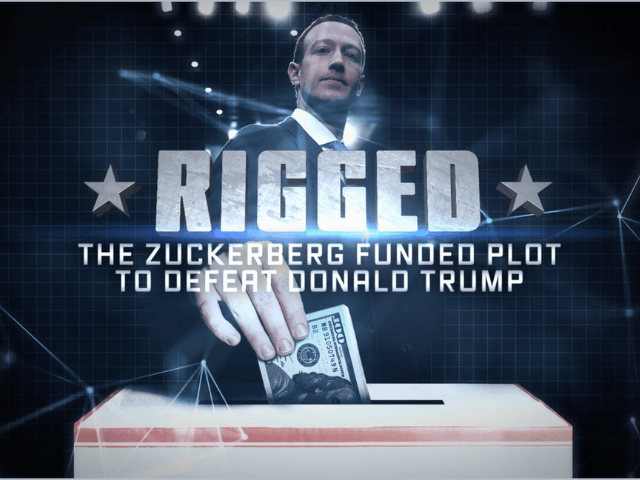 What if the 2020 election was “rigged” in plain sight and through entirely legal means using $400 million dollars from Mark Zuckerberg and his wife Priscilla Chan through the Chan Zuckerberg Initiative (CZI)? The bombshell upcoming documentary Rigged from Citizens United Productions explains how this Big Tech power couple contributed hundreds of millions of dollars to a pair of non-profit organizations through CZI. The non-profits, in turn, spent the money on a Democrat-focused get-out-the-vote effort all under the guise of pandemic “election safety.”

Rigged starts by recounting Big Tech’s role in the last two elections, starting with 2016, when Donald Trump–harnessing the power of social media–shocked the world by flipping the states of Michigan, Wisconsin, and Pennsylvania to pull off an upset victory against Hillary Clinton. By the time of Trump’s inauguration, Mark Zuckerberg had come under tremendous fire from the Democrat elite over Facebook’s perceived failure to censor content seen as favorable to the Trump campaign. But four years later, lo and behold, the coronavirus pandemic would give Zuckerberg a clear shot at redemption.

The documentary Rigged tells this story. Through their philanthropic organization the Chan Zuckerberg Initiative (CZI), which lists Barack Obama’s former campaign manager David Plouffe (who authored the book A Citizen’s Guide to Beating Donald Trump) as a key strategist, Zuckerberg and his wife donated $69.5 million to the Center for Election Innovation and Research (CEIR) and a whopping $328 million to the Center for Tech and Civic Life (CTCL), a non-profit headed by Obama Foundation fellow Tiana Epps-Johnson, who prior to creating CTCL in 2015, worked for an organization described by the Washington Post as “the Democratic party’s Hogwarts for digital wizardry.”

As former Wisconsin Supreme Court Justice Michael Gabelman says in the documentary, the CTCL essentially became a vehicle for Zuckerberg and Chan to fund get-out-the-vote efforts in mostly Democrat-populated districts in key swing states like Wisconsin.

In 2019, CTCL received a mere $2.8 million in contributions before the Chan Zuckerberg Initiative’s $328 million cash infusion in the lead-up to the 2020 election. Though these massive funds were labeled as “grants” for “safe administrations of public elections during the COVID-19 pandemic,” the documentary demonstrates that these donations were used to encourage and facilitate mail-in voting disproportionally in Democrat-run areas as well as to fund the proliferation of ballot drop boxes and a host of other things designed to boost Joe Biden’s vote totals in key swing states.

“They’re sending the money to big urban centers, they’re dramatically-increasing the ballot boxes that are there, and they’re conditioning the money on those polling locations, those government entities, throwing open the flood gates, to potential voter fraud,” Sen. Ted Cruz (R-TX) says in Rigged. “This was the greatest billionaire assault on election integrity we’ve ever seen.”

“The Zuckerbucks folks were paying governments with grants with conditions that they go do get-out-the-vote activities in the Democrat areas. In the Republican areas, they just gave them the money, and they said, ‘Hey, we’re helping them conduct the election,'” Ken Cuccinelli, the national chairman for the Election Transparency Initiative, explains in Rigged.

Hosted by Citizens United president David Bossie and featuring interviews from prominent conservative leaders, including Ted Cruz, Newt Gingrich, and President Trump himself, the documentary Rigged offers a warning cry for what’s surely to come if Republicans do not find a way to stop left-wing billionaires like Mark Zuckerberg from using their spending power to influence elections for years to come.

“He should totally be held accountable, and he should never be allowed to do it again,” Trump tells Bossie in the documentary. “It was a rigged election. People have to find out what happened, and they have to hold people accountable.”

You can learn more about this groundbreaking documentary and watch Rigged in its entirety here.