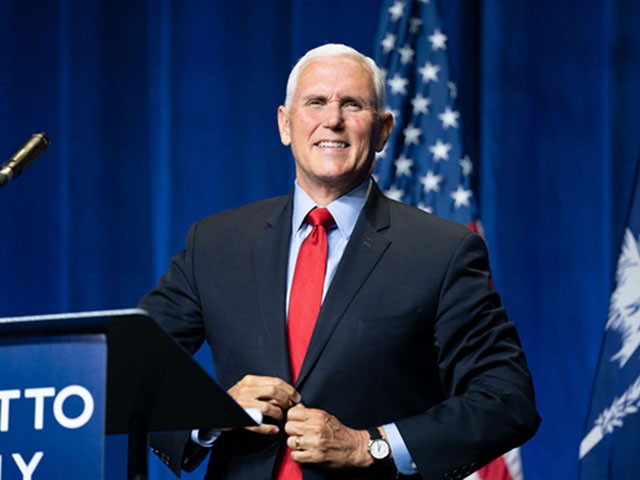 “We as an Editorial Board found ourselves questioning what should be protected under the premise of ‘diversity of thought’ and more importantly, what values we choose to accept on Grounds,” they wrote. “For us, the answer is simple. Hateful rhetoric is violent — and this is impermissible.” [Emphasis added].

But some faculty still believe “free speech is a fundamental … value” at Thomas Jefferson’s University.

“We are not interested in either defending or attacking Pence and whatever he might say,” the professors, spanning nine different departments, wrote. “We are more concerned that The Cavalier Daily believes that his speech constitutes ‘violence” that ‘threatens the well-being and safety of students on Grounds.'”

“This speech-is-violence argument is not only wrong — no calls for violence will be issued April 12 — but also contradicts the letter and the spirit of the First Amendment,” they continue, “which generally creates space for a wide range of views to be expressed so long as the relevant speech does not incite violence.”

The faculty members say the Daily’s editorial did a “disservice” to persons who actually are victims of physical violence.

“What saddens us about the mindset of The Cavalier Daily editorial is its assumption that the editors should enjoy the freedom to say what they want but others with whom they disagree should not,” they wrote, pointing out the Daily’s inherent hypocrisy. “The First Amendment protects not just those whose views the editors deem harmless.”

Then, quoting the University’s “Statement on Free Expression and and Free Inquiry,” the authors write, “Freedom of speech is among the most powerful tools by which wrongs are righted and institutions are improved or abolished.”

“Principles of free inquiry extend to robust discussion and critical examination of the past,” the statement continues. “Equally importantly, they live in the present and extend to the future, in a shared commitment to free expression for all speakers and all views.”

Invoking Jefferson, the faculty members conclude that “for here we are not afraid to follow truth wherever it may lead, nor to tolerate any error so long as reason is left free to combat it.”

In response to the Daily‘s editorial, the Jefferson Independent — a student-run conservative publication at the University — responded with its own, saying the attack on free speech did not come as a surprise. The Independent’s editorial said:

Students at the University of Virginia have displayed their childish hostility to any and all differing opinions on countless occasions, whether it be defacing flyers posted by certain student groups, painting over certain political messages on Beta Bridge, doxxing and harassing students on social media, or turning the University Judiciary Committee into a body that unjustly punishes peers who fail to toe a certain ideological line.

“What should shock the greater community, however, is the Cavalier Daily‘s sanctimonious assertion that its seven-member editorial board holds the full authority to define what constitutes free speech and what doesn’t,” it continued.

Citing another response article from University President Jim Ryan, the Independent wrote “one of the school’s goals is to allow students to ‘decide for themselves, as active members of our democracy, which ideas they support and which they oppose.'”

But this attempted cancelling of speech is not an isolated incident at the University, according to the Independent, which called Ryan’s piece a “PR stunt to placate very real concerns about freedom on Grounds.”

The Independent’s editorial board then went on to list several violations of freedom, including forced doses of an “experimental vaccine.”

“Having bodily autonomy, or even an open discussion about it, was not something students were entitled to have or ‘decide for themselves,'” they wrote.

Speaking of the broader implications of why the Daily felt comfortable writing such a fundamentally authoritarian piece, the Independent wrote “opinions such as those presented in the Cavalier Daily confirm that many students at UVA have not been exposed to an environment of differing opinions or a culture of debate.”

Pence is set to speak at a Young Americans for Freedom event at Old Cabell Hall, part of Jefferson’s Academical Village, April 12.