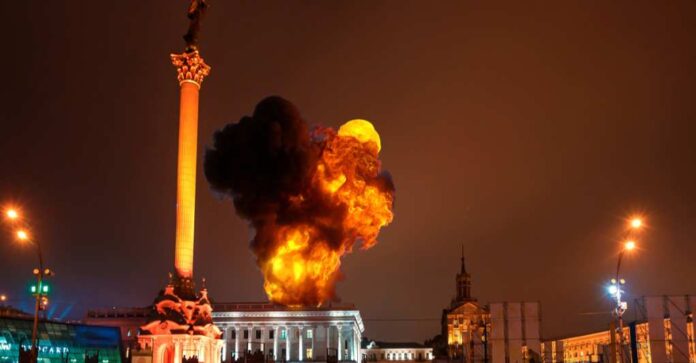 In a video released on Friday morning an oil depot in Belgorod, Russia was seen ablaze as the potential result of a Ukrainian attack. With a low flying helicopter appearing to send some sort of projectile into the oil depot, it is seen exploding and becoming engulfed in flames nearly immediately. As first reported by the news agency NEXTA, this reported attack is unconfirmed at present.

If the video is in fact real, a German journalist believes it “could have been a Russian false flag operation to justify further brutal attacks” on Ukraine. Given the reputation and past actions of the Kremlin as well as President Putin, it would not be unexpected for them to conduct such an attack. They have been caught numerous times attempting to allege illegal or unjust actions being carried out by Ukrainians against their forces, but with no proof.

An oil depot is on fire in #Belgorod, #Russia.

“The emergency services went to the place of fire, measures are being taken to eliminate it”, said Gladkov, the governor of the region in his Telegram channel. pic.twitter.com/ey7rC5ChSz

On the other hand, if Ukraine did decide to launch an attack 20 miles over the Russian border it would signify their resolve to stay and fight until the end. The resolve to stand there and trade blows until Russia withdraws is a dangerous and potentially devastating decision, but the civilians of Ukraine have been joining forces with their military and fighting valiantly against the Russians.

By destroying a key asset to the Russian economy Ukraine would be sending the message that they want to drag this fight out. In the mind of many Ukrainians since the Russians provoked them, they will see actions on their land that they could not possibly fathom. This kind of message is one the Russians are certain to not take lightly but given the rather weak and disorganized attack by their military they cannot last much longer.

Reports from war zones can often be unreliable. Given the frequent changes in the information as well as the changes in planning a lot can shift over the coming days and weeks ahead. As more pieces of information become available the clearer the picture of who did what will become. For now, one thing is for certain; it will certainly lead to an uptick in the level of Russian response and aggression.

For the time being the Ukrainian forces are dogfighting the Russians and pushing them back with more vigor than nobody expected. As they get an outpouring of support in the form of weapons, information, and supplies from other nations as well as civilian volunteers from across the globe, it allows them to keep the fight going forward and push the Russians back.

People who have been able to escape the violence and the Russian aggression tell tales of being fearful for their lives, and of their uncertainty of ever being able to return home. Some won’t even if they are allowed to. If this latest strike from the Ukrainians tells them anything, it’s that their countrymen won’t give up and they want to get revenge on the Russians that they need to start getting back to the Ukraine their people love.

As the oil depot continues to burn there are almost certainly other attacks to come. If this was a Russian false flag operation there could be severe sanctions for Russian authorities to pay, and the response from their population would be catastrophic for Putin and anyone else in a position of power. With so many Russians already against the mission in Ukraine, this would be a turning point for them. Should this prove to be a legitimate attack by Ukraine, then good for them for finally taking the fight back to Putin’s lands. Let his people have the fear that they have been giving Ukrainians.