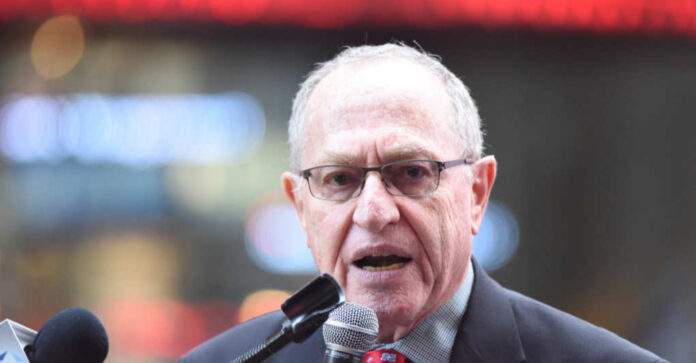 Well-known lawyer Alan Dershowitz is representing a January 6 defendant who is staring down a 20-year prison sentence. Dershowitz spoke in an interview this week about the acquittal of defendant Matthew Martin. He was being charged due to his involvement at the Capitol during the riot.

Dershowitz said that his acquittal is “enormously important” because it has set legal precedent and that should cause his legal team to have real momentum.

Martin, who was acquitted by a federal judge, was a former government contractor at a nuclear weapons laboratory in Los Alamos, New Mexico. He was cleared of all charges this week after his legal team argued that the Capitol police allowed him to enter the grounds and he was even waved into the building by the police, according to a report by The Daily Wire.

Alan Dershowitz is now representing Brady Knowlton. He spent 18 minutes in the Capitol on January 6. When they entered, they passed several police officers who were walking in the opposite direction. In an interview with The Daily Wire, Knowlton said that an officer told him, “You can go in as long as you don’t break anything.” He said that he then watched police and protestors shaking hands.

Dershowitz said that “the subjective intent of the defendant is key,” noting that the judge took Martin’s word over that of the police and the prosecution. The courts “have to look at the state of mind of the defendant.”

The famous lawyer said that if what happened in this week’s acquittal is the rule, he will win for his defendant. Dershowitz argued that it is clear that Brady “honestly and reasonably” believed that he was not violating any laws. In fact, he believes that he was welcomed into the Capitol as long as he did not break anything.

There are three other cases that have been resolved with defendants who were a part of the January 6 riot at the Capitol. Martin is the first defendant to be acquitted of all charges against him. Those charges were focused on entering a restricted building, disorderly and disruptive conduct in a restricted building, violent entry and disorderly conduct in a Capitol building, and parading and demonstrating in a Capitol building.

There are similar charges being made against Knowlton. In total, he could face 20 years in prison. The Department of Justice is standing on statute 1512 in the United States Code for their prosecution. Their case will revolve around the defendant’s obstruction of a congressional proceeding.

Knowlton is not just represented by Alan Dershowitz, he also has Harvard Law School professor Ronald Sullivan on his team. They have indicated that the defendant’s law degree has been withheld by The University of Denver, he and his wife were banned by Airbnb and the United States Customs and Border Protection took away their client’s Global Entry Access.

Brady Knowlton, the 40-year-old law school graduate, entered the Capitol building at 2:35 pm on January 6, 2021. He got access to the building through the Upper West Terrace doors. Along with hundreds of other people, he walked through the halls of Congress seeing the Rotunda and the Senate chamber gallery. He broke nothing and left after just 18 minutes.

The FBI arrested him in April and raided his home. According to FBI documents, they were looking for items that they did not find that might indicate conspiracy, planning, or preparation.

According to Dershowitz and the rest of his legal team, his outlook is good for the coming trial as long as the judge follows the precedent and the rule of law.