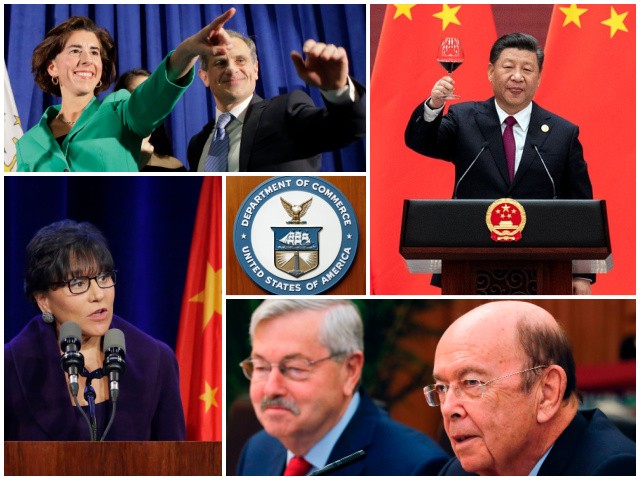 A new report by the Government Accountability Institute (GAI), entitled “Department of Cronyism: Inside Deals, Conflicts of Interest and Chinese Connections,” exposes the vast opportunities for cronyism and corruption within the U.S. Department of Commerce and the people who have taken advantage of it.

The report documented the existence of ties to China with President Joe Biden’s choice for commerce secretary, Gina Raimondo.

Raimondo, the former governor of Rhode Island, has a background in finance, having founded the venture capital firm Point Judith Capital in 2000. She is worth roughly $1.8 billion, based on her financial disclosure and as reported by Forbes. Raimondo’s husband, Andrew Moffit, worked for 20 years at the mega-consulting firm McKinsey & Co., but he left McKinsey in 2020 to became the “Chief People Officer” for a software company called PathAI that applies artificial intelligence and machine learning to medical diagnostics.

In February of this year, Moffit exercised his PathAI stock options and left his full-time job with the company. Instead, he became its “strategic adviser,” thus deepening his financial ties to the firm while creating the appearance of distance between his role with the company and his wife’s duties as Commerce secretary.

Artificial intelligence is the focus of the Commerce Department’s Bureau of Industry and Security because it often has direct military applications, making it sensitive to U.S. national security. Possible restrictions include the sharing of AI technology with foreign employees, an area in which Moffit could well be responsible as “Chief People Officer.”

In 2019, U.S.-based venture capital firm Danhua Capital Management (doing business as DHVC) participated in a $60 million fundraising round for PathAI. DHVC not only has holdings in sensitive technology sectors, but also has ties to a Chinese state-owned entity. Therefore, DHVC’s relationship with PathAI could raise conflict-of-interest and/or national security concerns,” according to GAI’s report.

Raimondo’s predecessor during the Trump administration was Wilbur Ross. Ross was a successful businessman with huge commercial ties to China. He had shipping companies that had major Chinese investment. In fact, Trump criticized him for being too soft on China while Ross ran the department.

Donald Trump’s ambassador to China was former Iowa governor Terry Branstad. The connections of Branstad’s sons really show the systemic levels of influence China has built up in Washington. His son, Eric Branstad, worked during the Trump administration at the Commerce Department, as an adviser to then-Secretary Ross. Branstad’s youngest son, Marcus, was a longtime lobbyist for the American Chemistry Council which, despite its name, actually lobbies for Chinese chemical companies, opposing some of Trump’s restrictions and trade agreements.

The report notes that when Eric Branstad left the Commerce Department, he went to work as a lobbyist for a Chinese telecom firm immediately after restrictions against that firm were lifted by the Commerce Department. “He actually goes over to China after he leaves Commerce and meets with Chinese officials and he brags about his access to the White House, and he makes good money there.”

Before him, President Obama’s Commerce Secretary was Penny Pritzker. She is the heir to the Hyatt Hotel fortune, but also has extensive commercial ties of her own to the Chinese, as the report also details.

The report provides support for the concept of “elite capture” – the explicit strategy on the part of the foreign countries like China to forge connections to the levers of power in various U.S. institutions to ensure favorable treatment.

Peter Schweizer is the president of the Government Accountability Institute, a senior contributor to Breitbart News, and the bestselling author of Red-Handed: How American Elites Get Rich Helping China Win.