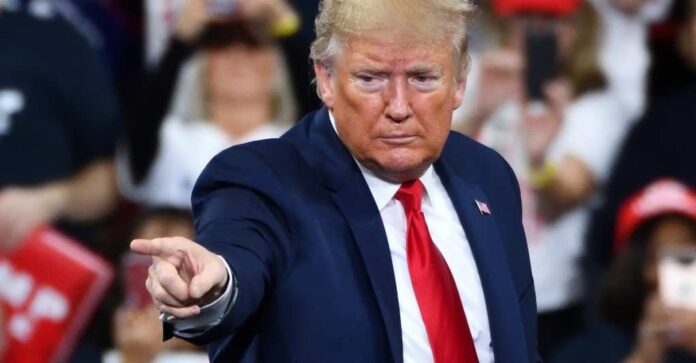 Doctor Anthony Fauci is a man that jumps sides. After Donald Trump left office, Fauci quickly swore his allegiance to the new order. His Democratic boss hailed him as the foremost expert on the coronavirus. And would ultimately lead Fauci into thinking that he was the final authority.

He would come to think that he could not make mistakes and that everything he would claim would be the gospel truth. But his pompous pride would be his undoing and what he claims now proves how insane the man has become.

Fauci’s latest speech called out Donald Trump again and tried to blame him for all of the deaths related to the coronavirus. The mouthy man tried to pin every death related to the virus on how Trump handled the pandemic. His accusation would also include all of the people that died while Joe Biden was busy strangling the country to death with massive amounts of mandates.

Fauci’s accusation is not backed up by any facts or data that could remotely prove what he stated about the former president. The crooked doctor took the time to jab at the former president because he is still active in politics and influences how people vote for candidates.

Anthony Fauci must have forgotten that the pandemic was uncharted waters for everyone. Trump made several decisions that saved lives. The former president closed borders and worked to empower people to come up with a vaccine to combat the virus. It was the Democrats that criticized him and resisted any decision he made in an attempt to protect the country.

Chris Wallace asked Fauci if things could have been better if more had been known. And all Fauci could do was speculate at best about the question. He stated, “I believe so. I believe so. I mean, I can’t quantitate it for you about how many fewer deaths. You can’t even model that, I don’t think. But there were certain things that were done that if they were done differently, we likely would have had. … For example, when we were trying to ‘lockdown,’ if you use that word, that’s a very charged word for some people.”

His pointless jab at the idea of lockdowns does not help his situation. The lockdowns he referenced did more harm than good. Many people would lose their jobs and homes because they were not allowed to work. People were attacked and charged with crimes when they attempted to leave their homes in liberal-controlled areas. And Trump had nothing to do with the issues lockdowns would cause.

Fauci also noted that “Remember, when we were trying to get the 15-day and then the 30-day extension during the Trump administration; and yet he was coming out, right after we came out and I said, with Dr. [Deborah] Birx, ‘Let’s do the 15-30 day,’ he would get up and say, ‘You know, ‘Liberate Virginia, liberate Michigan,’ which was just completely contrary and antithetical with what we were trying to do.”

The problem with what he was trying to do is that Fauci was not working with Trump because he was fighting him all along the way in making decisions for the country. It was not Fauci’s job to make the decisions during the pandemic. Trump had to make those choices. Fauci’s job was to present the facts and accept Trump’s decision, whether he liked it or not. But Fauci wanted to run the show.

Fauci maintains that the lockdowns early would have saved lives. But once again, there is no data to prove his statement. His comments about the past are nothing more than wishful attempts to smear a man that still is a thorn in the Democratic Party.

Fauci is a Democratic lover to the core. He has not once criticized Joe Biden or any of the liberals he works with. His love for the fame and fortune that he has received while working with the thugs has blinded him to the reality that he is in error and no one trusts his judgment.