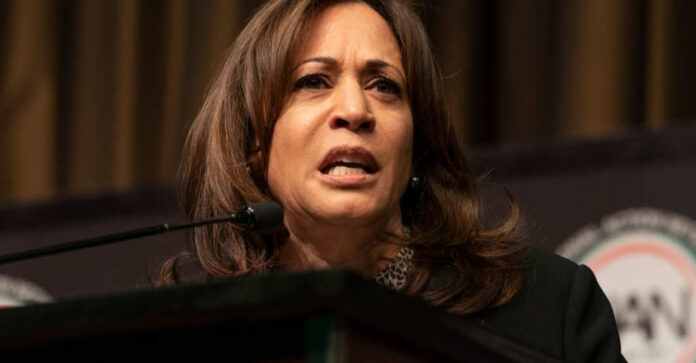 Should something happen to President Joe Biden, we’re left with the VP. Unfortunately for us, that means Kamala Harris.

This is a woman who wasn’t able to make it through the presidential primaries because Americans decided they didn’t want her to become president.

This is a woman who cackles when she is forced to tell the uncomfortable truth about something.

This is also a woman who was tasked with dealing with the southern border – and chose to do absolutely nothing.

Kamala Harris is about as useless as they come when we look at VPs over history. And her approval rating shows Americans on both sides of the political line agree. She’s even got a lower approval rating than Dick Cheney – and that’s REALLY saying something.

Her verbal diarrhea is what we really need to be concerned about. As people toss the idea of using the 25th amendment on Biden back and forth, there’s one problem – Harris would become the president.

The idea behind removing Biden is that we start to prove that the U.S. is strong. We need a strong president in place to show that the United States is not a pushover.

Kamala Harris isn’t exactly strong. She could turn us into a bigger laughingstock than we already are. To prove the point, let’s take a look at one of her latest public appearances.

Harris was on a radio show called “The Urban View” where she was asked about Pell grants. If you can figure out what she was trying to say, you have a one-up on most Americans.

“Um, we have definitely extended the – and I, it’s something that I think we need to keep doing, awareness about what we have to do on Pell grants, and I can follow up with you on specifically what we’ve been doing.”

Translation: she has no idea what’s going on with Pell grants. Instead, she’ll have someone from her office follow up with the radio show so that they can explain it to viewers. Oh, and she’ll likely have someone’s job because they failed to brief her on all of the questions that could possibly be asked.

When we hear responses like this out of a politician who doesn’t have a lifelong history of stuttering as we have with Joe Biden, it should terrify us. It means that she doesn’t know what’s going on in the White House. She’s out of the loop – and that begs the question of what she’s doing in her office every day.

Harris needs to know what is happening in the office. At the very least, she should have the intelligence to think about the question and tell the host that she’ll get back to them on it. Her response clearly showed that she had started to talk about the student loan payback, which of course is different than the Pell Grant program. Then, it was just one stupid pause after another, so now everyone is stupider for having listened to the radio show for that interview.

Biden has at least a partial excuse since he’s 78 years old. What’s Kamala Harris’s excuse, though?