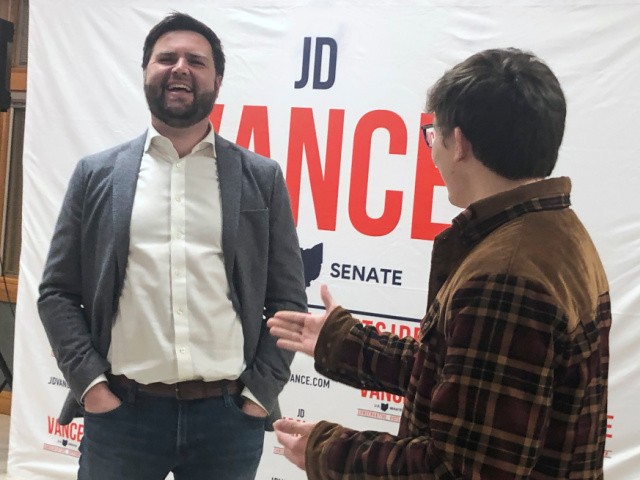 Calling the endorsement “hugely important and powerful,” Vance gave Trump great credit for getting involved in the primary races and openly supporting those he believes will benefit the country. While Vance said the campaign is going “very well,” he said the race is “definitely tight.” However, the Trump endorsement serves as an “incredible boost for us coming down the stretch.”

“So I felt confident before we got the endorsement. Man, I feel very confident now. I think frankly if we were 20 points behind we probably still win, but we’re going to win this thing now,” he said, speaking of how he will ultimately win the general election as well and bring a “different perspective to the Senate.”

Vance briefly acknowledged that he was not an early Trump supporter, but he had a “conversation” after seeing how viciously the swamp and establishment tried to destroy the president.

“And it made me realize, you know, if all these corrupt people” were going after him, he must be “doing something special and doing something right.”

“And really think that’s ultimately what this is about. Trump sees me as a guy who actually carries on his agenda,” Vance said, adding that Trump recognizes that he will be an ally in the Senate as well.

America First, Vance continued, is more than “just slogans and talking points.” He mentioned his GOP challenger, Josh Mandel, whom he said endorsed a European no-fly zone in Russia and on the flip side called those who pushed against escalation “Russia First” Republicans.

“Trump, if anything, is a rejection of the idea that we should give more money to the establishment to fight in stupid wars. And I just think on the substantive agenda, I’m more with Trump than anybody else, and that’s ultimately why he endorsed me,” Vance said.

Vance said Trump called him and walked him through why he endorsed him, and they discussed his potential Democrat challenger, Tim Ryan, whom Trump believes is a stronger candidate than people give him credit for. He pretends to be a Trump Democrat in certain ways, Vance explained, before speaking of his own success in the GOP primary debates. He said there is a difference between someone who knows the issues and politicians with their “consultant approved lines.”

“I’m actually going to tell you what I think,” Vance said, adding that Trump recognizes him as someone who can “go toe to toe with Tim Ryan.”

“Only in politics can you fail for 20 years, as Tim Ryan has done in Congress, and try to get a promotion to the U.S. Senate. I don’t think it’s going to work, but the only way it’s not going to work is if we actually send the right guy to fight back against the Democrats in the general election, of course, and that’s going to be me,” Vance said.

In the endorsement, Trump listed a series of specific reasons he is supporting Vance.

“He’s strong on the Border, tough on Crime, understands how to use Taxes and Tariffs to hold China accountable, will fight to break up Big Tech, and has been a warrior on the Rigged and Stolen Presidential Election,” Trump’s endorsement reads in part.

Vance spoke about each issue, telling Breitbart News Saturday that the border crisis, specifically, could “spell the end of the country as we know it.” He personally has been affected by the drug epidemic in his family and identified it as a top problem. He also said wage competition for middle class and working class is a major issue, adding that the U.S. “cannot let multinational corporations import a servant class from Central America every time they need workers.”

“They need to train their own people,” he said.

He also blasted Democrats who are “very open” about giving illegal immigrants the right to vote, which he said will result in never having a Republican win a national election again. Democrats, he said, want to transform the electorate with people who broke our laws, “but this is why we need people like me” to speak out.

The border crisis “is the major crisis that we face as a country right now,” he said before also speaking of the crime wave, making it clear that law enforcement needs to feel protected and “Soros-backed prosecutors” need to be addressed.

On the issue of China, Vance blasted the many politicians who say they want to hold China accountable, adding that he is the only one who said, “We need Trump’s tariffs, we need to bolster them.”

The U.S. is not going to fight China by doing the same thing we’ve been doing for the last 30 years, Vance said.

On Big Tech, Vance said politicians must update the antitrust framework and work on declaring those massive companies common carriers.

And finally, Vance said he continues to stand as a proponent of election integrity, making it clear that the country must get rid of “election season” and go back to “Election Day.” He also said voter ID is essential, and ballot harvesting must be stopped.

“Trump is just right on this. The more we learn about 2020, the more we realize there were significant issues. We cannot give up on the issue. Everybody always says you got to look forward; you can’t look past. Well, part of looking forward is making sure we have safe and secure elections for the next time we go to the ballot box. It’s not about looking in the past,” Vance said. “It’s about ensuring we have a real country.”

Ohio’s Election Day is in less than three weeks, on May 3.