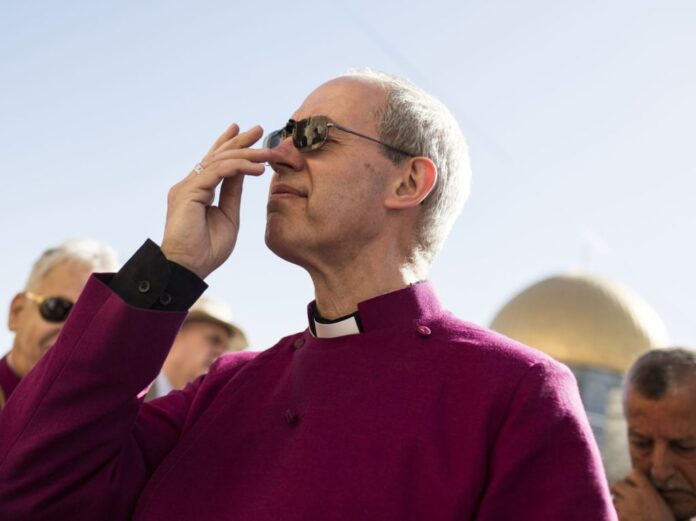 In a highly political “sermon” preached at the service of Holy Communion at Canterbury Cathedral and broadcast on BBC Radio 4 on Sunday morning, the woke archbishop loosely linked the resurrection of Jesus Christ to a number of contemporary political issues he is interested in, including the conflict in Ukraine, “the rising cost of power, fuel, and basic food”, and, of course, immigration.

“[T]his season is also why there are such serious ethical questions about sending asylum seekers overseas,” the Archbishop of Canterbury claimed, referring to the Boris Johnson administration’s plans to finally do something about the ever-worsening boat migrant crisis by striking a deal with Rwanda, a safe third country, to host some male asylum seekers while their asylum claims — often bogus — are processed.

“The details are for politics and politicians. The principle must stand the judgement of God and it cannot,” declared Welby, who himself has a direct role in lawmaking as a member of the House of Lords.

“It cannot carry the weight of resurrection justice, of life conquering death. It cannot carry the weight of the resurrection that was first to the least valued, for it privileges the rich and strong,” he went on, without offering a clear explanation as to how paying Rwanda to host people who illegally enter British territory from France — a safe European Union member-state — is an exercise of “privilege”.

The Anglican leader went on to assert that the Rwanda scheme “cannot carry the weight of our national responsibility as a country formed by Christian values, because sub-contracting out our responsibilities, even to a country that seeks to do well like Rwanda, is the opposite of the nature of God who himself took responsibility for our failures” — again, without explaining why the British people must be responsible for migrants illegally entering British territory via France, usually after having already passed through multiple other safe countries first.

Archbishop Welby is no stranger to exploiting his role as Anglicanism’s most senior cleric as a platform to lobby for woke political causes, having also used his most recent Christmas message to lecture people on the supposed need to welcome boat migrants.

Welby has also praised the European Union as “the greatest dream realised for human beings since the fall of the Western Roman Empire”, announced a Black Lives Matter-inspired review to purge churches of supposedly offensive historic statues and memorials, and implied that the unvaccinated do not “love one another as Jesus said”.

He is also a keen virtue-signaller, condemning his church’s supposed lack of ethnic minority leaders and condemning himself for his own “white advantage” and “straight advantage” — but stopping short of actually stepping aside for a gay minority cleric, which would cost him his public position and palace home.

The Church of England’s lay members, who perhaps not coincidentally are rapidly depleting, do not appear to share their top cleric’s left-liberal politics, however, with the great majority being Brexit supporters and an overwhelming 87.6 per cent wanting to see immigration reduced.