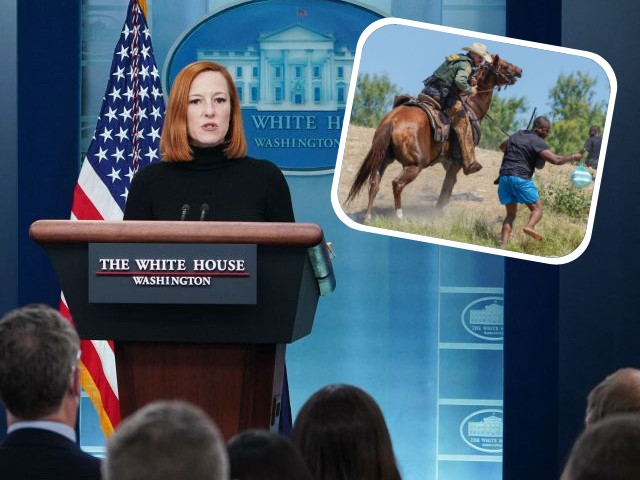 White House press secretary Jen Psaki refused to address reports showing the agents involved with the accusations were cleared of criminal wrongdoing, despite accusations from President Joe Biden and other administration officials that they were guilty of whipping or “strapping” the migrants.

The allegations against the agents occurred on September 19, 2021, near a makeshift outdoor encampment holding roughly 15,000 mostly Haitian migrants at the time. Video and photographs taken by freelance journalist Paul Ratje were widely circulated and sparked initial claims that agents were “whipping” migrants.

Despite the results of the investigation, Psaki repeatedly insisted that the process was not concluded.

“There is a process and an investigation,” she told reporters during the daily briefing on Monday and added, “I’m sure we’ll have a comment on it after that.”

DHS Secretary Alejandro Mayorkas famously said the investigation would only take only “days,” not weeks.

The tedious investigation involved the horse-mounted border patrol agents in question getting removed from active duty.

Biden famously berated the border agents during a speech after the images went viral.

“It was horrible to see what you saw, to see people treated like they did,” Biden said last week. “Horses running them over, people being strapped. It’s outrageous. I promise you those people will pay.”

Psaki herself accused the agents of “brutal and inappropriate” behavior after activists, and public figures criticized them for following orders and enforcing the law.