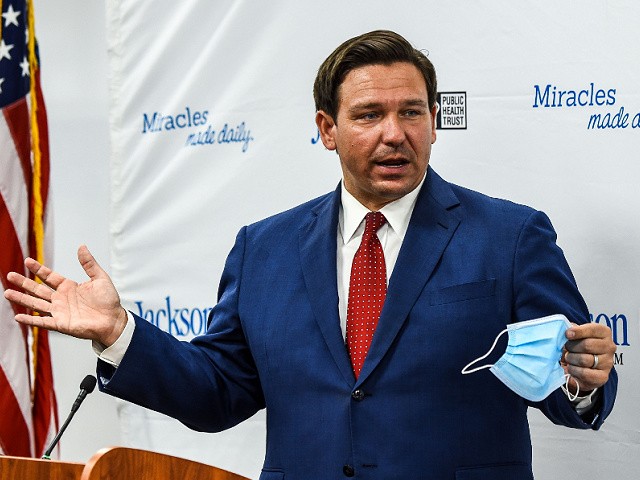 “We are very happy that finally we have judicial relief for that unscientific mask mandate on airplanes,” DeSantis said. “They’ve treated these flight attendants horribly for so long — the passengers, horribly.”

“It’s caused huge problems with just behavior because it, it really messes with people and when they announced on those flights yesterday that the judge had ruled. I mean, you saw some of these flight attendants were crying,” he said, referencing the countless videos surfacing on social media showing airline employees embracing each other with joy over the announcement.

“They were so happy. People were so relieved. And so, you know, we filed a suit against this right before it was supposed to expire, and I think because Florida filed the suit, Biden extended it just because he doesn’t want to give us a win,” DeSantis mused.

“But by him extending it, it did allow this judge in middle Florida to be able to rule. And so our view is very simple,” he added. “Zero mandates of any kind.”

“This rule, this order is completely outside the bounds of the scope of federal power as we have argued successfully in numerous other cases, the CDC and the federal government and the Biden administration never had the power to issue this order originally,” Moody said at the time, expressing faith that the court would “agree with our legal analysis.”

That aside, DeSantis has long mocked the Biden administration’s federal masking rule, noting the complete absurdity of it.

“It’s not something that’s grounded in any science because if you have somebody sitting in the window seat and they’re nibbling on peanuts for two and a half hours, they can have their mask down,” he said. “You have the person in the middle seat that is not eating, if they just wanted to read a magazine without the mask, somehow that would be a big problem.”