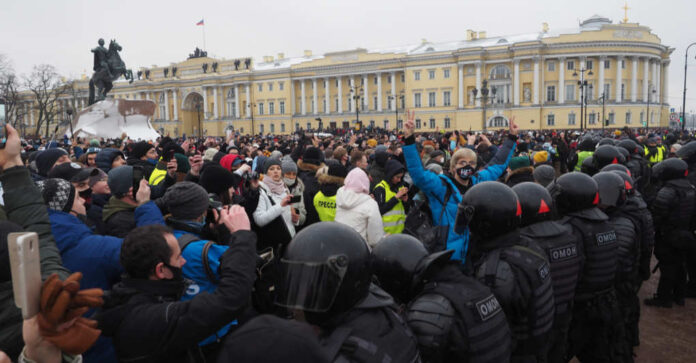 It isn’t advisable to protest in Moscow against Vladimir Putin. The former pint-sized KGB agent rules with an iron fist and what he says goes. Angry crowds protesting against his invasion of Ukraine were immediately dispersed and a good number were arrested. Despite this, the protests continue, but only by the brave and the few.

Last month the Kremlin passed a convenient law that prohibits speaking out against Putin’s war. Technically it forbids the spreading of “false information” because it might disparage the troops, which also technically means that no one in Russia is allowed to speak the truth.

Since the mass protests, Russian authorities have rounded up a former police officer who spoke on the phone with friends about the war, a priest who railed against the war to his congregation, and a student who held up a sign with no words, just a series of asterisks. These are but a few.

So far over 500 Russian protestors have received misdemeanor charges with heavy fines attached and at least 23 are known to be facing jail time.  Putin doesn’t play.

Damir Gainutdinov heads up a legal aid group called Net Freedom that concentrates on freedom of speech violations. In reference to the number of cases being brought against Russian Citizens, Gainutdinov said, “This is a large amount, an unprecedentedly large amount.”

The Kremlin tried its best to portray the storming of Ukraine as a “special military operation” and ordered the media to not call it a war or an invasion. Any media outlet that dared to deviate from the directive had their airwaves blocked.

The crowds have been scared away but reports of single protestors being whisked off the streets are coming in every day and apparently, it doesn’t take much. A man in Moscow was arrested for reading (to himself) Tolstoy’s “War and Peace” while sitting next to a statue representing Russia’s stance against Nazi Germany in WWII.

The former police officer who was arrested, Sergei Klokov, is facing a 10-year prison term for his phone call with friends. He was born in Ukraine and his father still lives there. Klokov’s wife told a local news site that her husband condemned the invasion and the cops came rolling in.

Sasha Skolichenko, an artist in St. Petersburg, is also facing 10-years in the slammer for swapping out the price tags in a local store with flyers condemning the war. She’ll spend a minimum of 45 days behind bars while awaiting her trial.

Marat Grachev who makes a living repairing Apple products found himself in a world of trouble for displaying the web address of a petition called “no to war” on a screen in his shop. An elderly pro-Putin man reported him when he refused to take it down.

Putin still has the support of many Russians but that support is dwindling as more information begins to reach the citizens about the deadly atrocities in Ukraine. Right now Putin has the protestors under control. But this is subject to change as more and more Russians begin to discover the truth, so the problem may end up fixing itself.

The best we can hope for is that Putin gets dragged out of the Kremlin and hung in the town square, but not until a deal can be worked out with pay-for-view so we can all have the pleasure of watching.