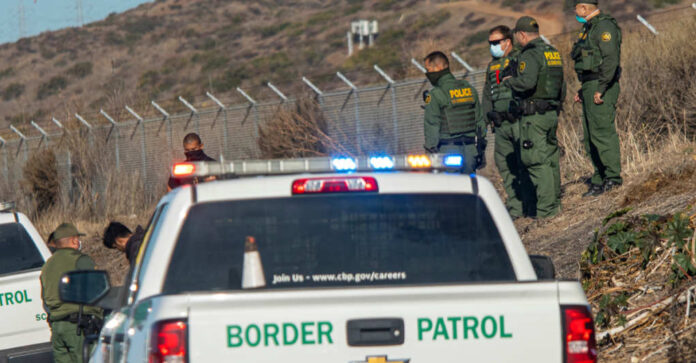 The southern border is being ignored by Joe Biden and the rest of his worthless administration. They act like there are no issues and that everything is fine down south. But for the people living by the border, life is a constant struggle to stay alive and safe. Millions of people continue to flow over the border illegally each year. And with Biden not willing to stop it, the country’s future hangs in the balance.

Before Biden ever took office, Donald Trump worked with Mexican leaders to stem the tide of people. But Biden went back on the deal and opened the flood gates for people to come north. His failure as president has given way to others to step up and do what he refuses to do, and that is to protect America.

Governor Greg Abbott from Texas has proven that securing the border can be done if leaders from both sides are willing to work together. Abbott pointed out that he and the governor of Nuevo Leon would secure parts of the border that run along with Texas.

The Daily Wire reported that a press release stated, “Governor Samuel García signed a memorandum of understanding between the State of Texas and the Free and Sovereign State of Nuevo León to enhance border security measures that will prevent illegal immigration from Mexico to Texas and improve the flow of traffic across the Colombia Solidarity International Bridge. The agreement goes into effect immediately.”

The massive amounts of people affect the United States and those living in Mexico. The illegals are clogging up the roadways used to travel over the border, which keeps people from getting to work.

Greg Abbott is not about to let a liberal president destroy America. Abbott stated that “Texans demand and deserve an aggressive, comprehensive border security strategy that will protect our communities from the dangerous consequences related to illegal immigration. Until President Biden enforces the immigration laws passed by Congress, Texas will step up and use its own strategies to secure the border and negotiate with Mexico to seek solutions that will keep Texans safe.”

The point that Abbott is making is that Biden will never secure the border and enforce the laws that are already in place. The president is content to sit back and let America get overrun by many illegals.

The way that Abbott is protecting the border mirrors that of what Donald Trump did a few years ago. Trump agreed with Mexico that they would help house asylum seekers until their court dates in America. They would also stop caravans from moving northward by securing their southern borders.

Abbott’s move has also attracted the attention of other state leaders from Mexico. They are interested in making a deal with Texas with the hopes of a better future for every person affected by Biden’s illegal mess.

Greg Abbott had warned President Biden that should he continue to ignore the border; illegals would be sent to Washington. The governor stated that no other state has ever done what Texas does. He took a page out of Biden’s playbook, loaded up many charter busses with illegals, and sent them on to Washington.

The territory will now have to deal with an influx of illegals. Biden has been bussing and flying illegals into the heartland for months, so Abbott believes it is time for him to taste his own medicine.

Joe Biden believes that as long as he is thousands of miles away, the problem is not his to deal with. He forgets that the president’s job is to help the nation and not just the part where he falls asleep throughout the day. Abbott knows that a Democrat will never take action unless the problem shows up at his home. Biden is about to have a lesson on what illegal immigration is all about.