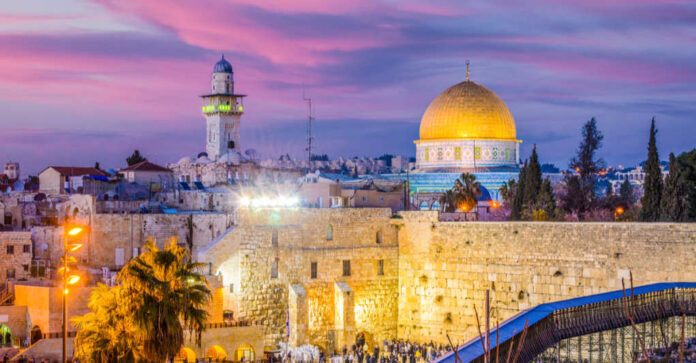 Vladimir Putin has crossed over the line of insanity and into the realm where he believes that he is the most important person on the face of the planet. His bold attacks on Ukraine have fueled a lust for power and a desire to control the world. His latest demand has proven how crazy the man has become, but it has also proven to everyone that he thinks the world should bow before his feet.

Putin drafted a letter to Prime Minister Naftali Bennett of Israel demanding that he turn over control and ownership of the Alexander Nevsky Church to Russia. He wants the power to dictate what happens at the church and who gets to come and go from that location.

The church building is located in the Christian Quarter of Jerusalem and has become somewhat of a tourist attraction to people worldwide. Some people know the church by its alternate names: the Cathedral of the Holy Trinity and the Alexander Courtyard.

Putin’s demands come from when Benjamin Netanyahu served as the Prime Minister of Israel. Netanyahu brokered a deal with Putin that Russia could control the church after he freed Naama Issachar. Issachar was charged with dealing drugs in Russia and was put into prison because of accusations.

According to the Orthodox Palestine Society of the Holy Land, the deal was said to be purely political and should have never been made. The vital site is essential to many people for many different reasons. It stands to reason that there will be contention over any site that would be given away for any reason.

Society accused Netanyahu of making the deal on political grounds. And they were able to get a judge to agree with them. The agreement would be overturned by an Israeli judge that would side with the society and base its judgment on the point that it looked like a political move.

The government of Israel has pointed out that the Russian Imperial government is the rightful heir to the site. They were the owners of the site when the Ottomans ruled the area. The judge seems to have quickly backed out of the matter as they stated that Prime Minister Bennett would have to decide to honor the deal or not. Bennett was an easy out for the judge to avoid criticism in a matter that the legal system had no business getting involved with.

The agreement stands in peril because of the way Russia is treating others. Russia is accused of human rights violations and suspended from the U.N. Human Rights Council. After all, a nation that is violating human rights should not be in a position to try and make life better for humanity when behind the scenes, they are murdering innocent people.

Sergei Stepashin is the former Prime Minister of Russia. As reported by Ynet News, He stated that “Now we are fighting for the return of the compound, and it is very difficult. We were almost there, we worked for five years, we found all the historical documents, but the situation with Ukraine occurred, and Israel behaved as it often does — playing with both sides, playing ping pong with everyone.”

Russian leaders act like the world owes them a favor. They think they can treat people horribly and murder innocent people and still have all the rights and privileges of being an influential force for good in the world.

The transfer of ownership of the church to the Russian people will cause many problems for nations against Russia. But the deal was made during a time of peace. The national word of Israel hangs in the balance. They will either be seen as a nation that sticks to its word or a country that goes back on it. The judge has no right to interfere in the property transfer and then conveniently remove themselves from the issue by putting it back into the government’s hands. Such action is worthy of corrupt Democrats.