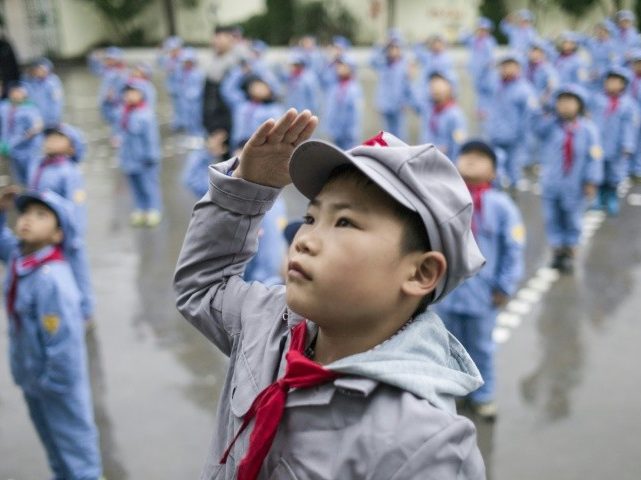 China’s state-run Global Times touted the report as “highlighting the historical achievements the country has made in youth development in the new era, the generation’s amazing vibrancy and passion, and their arduous tasks and responsibilities for national rejuvenation.”

According to the report, young people in China have not a single complaint about the policies of their dictatorship, and feel not the slightest twinge of envy for the freedoms enjoyed by their peers in other nations:

The white paper said that young Chinese people in the new era are confident, aspirant and responsible. They wholeheartedly support the leadership of the Communist Party of China (CPC). With a global vision, they stand at the forefront of the times bursting with commitment: pursuing lofty ideals with a firm belief in Marxism, communism and socialism with Chinese characteristics; full of patriotism, sharing weal and woe with the country and the people.

They also display the sterling quality of living up to responsibilities, are the first in the country to worry about the affairs of the state and the last to enjoy themselves, and strive to be pioneers in, pacesetters for and contributors to the country’s development.

Analysts said the Chinese young generation today enjoys much better conditions in terms of economy, education and technology, and their patriotism, global vision, openness, talents and confidence will help the country lead the international competition in the future.

A Chinese student from Renmin University of China holds a flag as she sits with others as they are seated to adhere to social distancing during their graduation ceremony at the school’s campus on June 30, 2020 in Beijing, China. (Kevin Frayer/Getty Images)

Young people imprisoned by China’s deranged coronavirus lockdowns — contemplating their dwindling food supplies while the grandparents die for lack of medication and their family pets are beaten to death in the streets — might have shown a bit less enthusiasm, as might young Uyghurs exploited as slave labor by Chinese state enterprises and their Western customers, but the white paper authors apparently felt no urge to consult them.

A girl looks from a window in a residential area on April 12, 2022 in Shanghai, China. (Photo by Getty Images)

By a happy coincidence, the findings of the government white paper on the bubbly attitude of Chinese Communist youth lined up precisely with dictator Xi Jinping’s expectations of young people expressed in speeches across his decade in power.

“In the new era, our young people should make it their mission to contribute to national rejuvenation and aspire to become more proud, confident, and assured in their identity as Chinese people, so that they can live up to the promise of their youth and the expectations of our times, our Party and our people,” Xi said in a July 2021 address to the Chinese Communist Party Central Committee.

China’s President Xi Jinping greets children waving the flags of China and Macau upon his arrival at Macau’s international airport in Macau on December 18, 2019. (ANTHONY WALLACE/AFP via Getty Images)

The sunny white paper was published at the very moment that China’s big underground story – the news state media are forbidden to report – concerns the growing number of middle-class Chinese attempting to flee their country. Fear of Shanghai-style coronavirus lockdowns has grown so pronounced that Communist officials began confiscating passports from the population this week.

Even before the current lockdown horrors, observers who do not work for the Communist government noticed growing frustration and anomie among Chinese young people. The Chinese even have a term for it: tang ping or “lying flat,” which means young people foregoing marriage, children, homeownership, and corporate employment to live a minimalist lifestyle in protest of politics and corporate practices.

In a June 2021 analysis, Voice of America News (VOA) said the tang ping movement picked up steam in response to the “996 culture,” the much-criticized insistence of Chinese companies on making their employees work 9 a.m. to 9 p.m. six days a week.

The pandemic created a new logjam of tang ping youth who found themselves competing for a greatly reduced supply of professional positions — and a growing sense that higher education was a waste of time and money when blue-collar work was better than trying to find a corporate position in China’s ugly, overcrowded cities.

Young people also reported a dismaying lack of upward mobility in Chinese society — far less than their parents, who enjoyed the explosive growth of Deng Xiaoping’s openings to capitalism in the 1980s.

“I chose to lie flat from the beginning. It’s too hard to buy a house and a car in big cities. It’s hard to find someone to marry, and if you have kids, you have to enroll them in all sorts of activities to give them a head start. So I chose my current lifestyle. Simple food, simple life, some gigs to make a little bit of money,” one 24-year-old living the tang ping life in rural Sichuan told VOA.

The Chinese government hated the tang ping movement and ordered state media to portray the lifestyle as shameful, selfish, and indolent.

In October 2021, Foreign Policy noted the Communist Party was using “the whole of its propaganda might to push a simple message: the young must throw themselves into work and life with a zest befitting China’s glorious ‘New Era.'”

Foreign Policy thought the Communist regime had good “reasons to worry,” as reflected in the growing demographic crisis caused by young people refusing to get married and have children.

“Although China experienced a robust economic recovery from the pandemic, the stimulus measures it had required further distorted the country’s debt-laden economy. The corrective that Chinese leaders are hoping for–a giant wave of pent-up demand from young Chinese–has yet to materialize,” the article noted.

While the new white paper from Beijing claimed the Chinese education system has turned out a vast army of eager young Red Guards brimming with enthusiasm for the Communist future, Foreign Policy noted the heavy politicization of education has actually produced a generation with little “intellectual autonomy” and less confidence that diligent work will be rewarded.

Instead, the next generation of Chinese students grapples with depression and self-loathing, convinced their inability to launch good careers and raise a family must be due to their own inadequacy, because they have been forcefully taught to believe the flawless Chinese Communist system could never fail them.