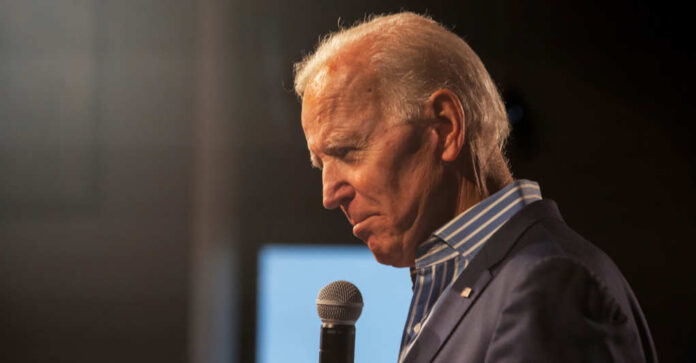 President Biden has lost favor on both sides of the aisle. Critics on the left and on the right believe that he has been underwhelming in dealing with the very big challenges that face America today.

Both sides are warning the White House administration that they will pay a price in the November midterm elections.

The hardline progressives on Biden’s left are frustrated that the president has not really dealt with their most important priorities like voting rights, climate change, and student loan forgiveness.

But on Biden’s right, conservative and most independent voters are sure that the president has not sufficiently addressed the two most important priorities, inflation, and immigration. The country is experiencing the highest rate of inflation in decades and there continues to be a crisis and chaos at the southern border.

And there is Average Joe…right smack dab in the middle hoping that his average achievements might be enough to sway voters.

Biden traveled to New Hampshire this week to rally approval for his improvements to waterways. This happened through a bipartisan infrastructure deal he got through Congress last year. In a speech there, the president touted the funding that will come to dredge a shipping channel in the harbor of Portsmouth…let the reader yawn.

The next day the president unveiled a new plan to make federal agencies more responsive to needs in rural communities. And following that, Biden heads to Portland to visit another infrastructure win from his administration.

All this while our economic “Rome” is still burning with record inflation and the president’s approval rating hovers near record lows. Only 42% of Americans approve of Biden’s job performance and 52% disapprove.

When voters are asked about Biden’s performance on crime, immigration, and inflation, more than 60 percent of them disapprove of the president’s performance. When polls just focus on inflation, the number rises to 69% disapproving and only 31% approving.

Once again, Biden’s criticism is not just roaring from the right, there is a fair amount of languishing from the left too. Democratic Senator Elizabeth Warren wrote in an op-ed for The New York Times this week that her Party had “promised more” than the Biden administration has delivered.

Warren ran against Biden for the 2020 Democratic nomination for president. She recently warned, “To put it bluntly: if we fail to use the months remaining before the elections to deliver on more of our agenda, Democrats are headed toward big losses in the midterms.”

The Massachusetts senator believes that the White House has to make progress on student loan cancellation, lowering prescription drugs, and making sure workers are eligible for overtime pay. She said Biden could do all these things with executive orders.

That’s not all Biden is hearing from the radical left. There are calls for dramatic action on climate change and a global minimum corporate tax. On issues like this, some of the progressive voices think that Biden is not meeting his moment and he is playing it safe.

John Paul Mejia is the national spokesperson for the progressive and youth-oriented Sunrise Movement. He has shared his disappointment over the fact that the promise of the Biden administration has shifted to what he calls a “botched legislative agenda.” Mejia does not see much hope for the future and believes the president’s inaction will not only cost the Party in November but will sap the “longer-term commitment of younger activists.” He said that if the Democrats can’t follow through with their promises when they have had two years of being in the White House and controlling both the Senate and the House, young people are going to be very discouraged.

Simon Rosenberg leads NDN, a centrist liberal think tank and advocacy organization. He said that the Democratic Party will be judged on whether people think things in America are better. He said the first job of leaders in the Party is to explain to people how they have made things better.

It does not seem like the president is getting that message through to both the right and the left.