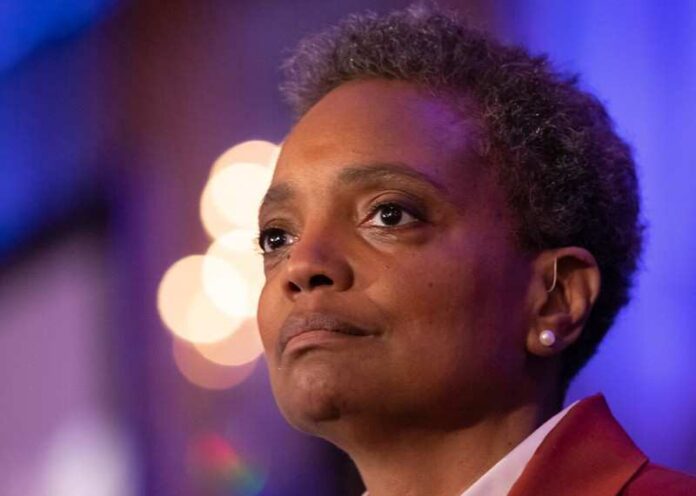 Mayor Lightfoot of Chicago is being deliberate with her actions when it comes to who she will and will not give interviews to. She claims that she’s being diverse. What she’s really being is racist.

The word “diverse” means showing variety. That means that if she wants to be diverse with who she gives interviews to, she would have to give interviews to reporters of all colors.

She has announced that she will only be giving one-on-one interviews to reporters of color.

Does Lightfoot realize that Chicago is comprised of a diverse population? While she, herself, is black, she represents constituents of every color.

She may have been brainwashed by Black Lives Matter too much.

Does she think that this move is going to win her any votes? What happens when she’s up for reelection and the white population decides that they’re not going to vote for her because they haven’t been represented?

If Lightfoot truly wants to be diverse, she has to do interviews with reporters of all colors. Instead, white reporters are being outright denied – and that means that various news stations and publications simply aren’t able to tell the city’s story to their followers.

Several reporters refused to believe such a thing. Clearly, they must be mistaken.

Mary Ann Ahern, a white reporter for a local NBC channel, was told by the mayor’s spokeswoman that only black or brown journalists would be given interviews. After tweeting this little tidbit, several other white reporters confirmed that they were told the same thing.

Suddenly, reporters from every station are coming together in order to discuss the racism that the city’s mayor is exhibiting.

The demographics in Chicago need to be understood. 33% of the population identify themselves as white (non-Hispanic). This means that Lightfoot is choosing to directly turn her nose up at the majority of the population. She’s catering to the 29% that are Black and the 8.8% that are Hispanic. Even the White Hispanic that account for 18% of the population wouldn’t be granted interviews based on Lightfoot’s reasoning. After all, she’s choosing to judge everyone based solely on the color of their skin.

Lightfoot tweeted to help explain why it is that she’s doing what she’s doing. Though, it really only leaves more questions. She commented that “It’s a shame that in 2021, the City Hall press corps is overwhelmingly White in a city where more than half of the city identifies as Black, Latino, AAPI or Native American.”

Okay, but knowing that the press corps is overwhelmingly white, she has to know that she’s not going to get many interviews. Perhaps she should start some scholarships and encourage more people of color to become journalists. These things take time. Granting interviews only to people of color will not suddenly create journalists.https://twitter.com/MaryAnnAhernNBC/status/1394766979450425360?ref_src=twsrc%5Etfw%7Ctwcamp%5Etweetembed%7Ctwterm%5E1394767814192504842%7Ctwgr%5E%7Ctwcon%5Es2_&amp;ref_url=https%3A%2F%2Fdailycaller.com%2F2021%2F05%2F19%2Fchicago-mayor-lori-lightfoot-interviewing-journalists-of-color-white-black-twitter%2F

I ran to break up the status quo that was failing so many. That isn’t just in City Hall.

It’s a shame that in 2021, the City Hall press corps is overwhelmingly White in a city where more than half of the city identifies as Black, Latino, AAPI or Native American.

As the mayor of such a diverse city, Lightfoot needs to show her diversity, not her racism.

Instead of embracing the diversity that she has in her city for her two-year inauguration, she has done something ugly. And if she thinks that this is going to win her votes to get her reelected, she is sadly mistaken. Even the BLM groups around Chicago won’t be able to help her fix this epic mistake.