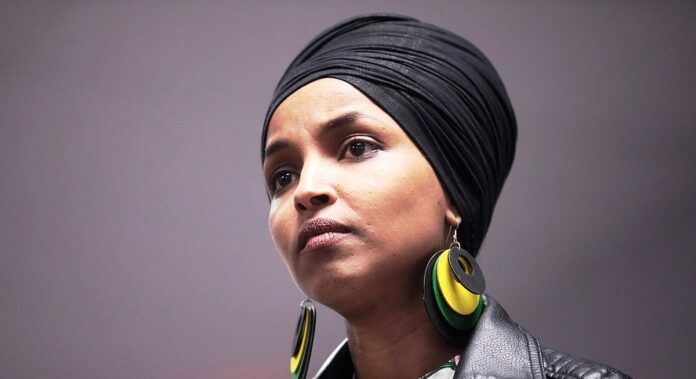 The Islamic lover supports the attacks against Israel. Her hatred for the Jewish people is widely known. She has stood behind the mic and blasted Israel for overdoing things in their right to be involved. She stood against America when the embassy was moved to Jerusalem. And She certainly has not been favorable towards Israel taking down Hamas.

Her fit started when Facebook allowed an ad to be run, showing Omar’s support for her terrorist brothers. The American Israel Public Affairs Committee came out and posted the ad showing Omar’s nasty-looking face on the rockets that Hamas was firing at Israel. The ad stated that “When Israel Targets Hamas Rep. Omar calls is an ‘act of terrorism.’”

Omar has the same view each time her Muslim brothers are attacked. She calls the victims of terrorism the terrorists and insists that her family is right in killing innocent people. Her backward view of what is right and wrong is typical Democratic thinking.

Hamas has long tried to kill innocent people. They believe, like Omar, that Jews and Americans are a waste of skin. She loves it when her Muslim family attacks and terrorizes the land of the free.

The ad that was placed in favor of Ilhan Omar responded to her statement on Twitter that “Israeli airstrikes killing civilians in Gaza is an act of terrorism.” She does not even know which side is killing civilians. Hamas started the fight by killing Jewish kids. And nowhere was the self-righteous Omar to be found. She never once called out Hamas for bombing kids in Israel.

Omar continued her hateful posting by stating, “Palestinians deserve protection. Unlike Israel, missile defense programs, such as Iron Dome, don’t exist to protect Palestinian civilians. It’s unconscionable to not condemn these attacks on the week of Eid.”

Palestinians would not even need such a system if they did not start the fight in the first place. And Israel would not have to use the Iron Dome in Hamas, and others would stop trying to kill Jewish people. Omar needs a noodle slap across the head to wake her up to the reality that her beloved people are the ones causing the trouble.

Omar believes that she can post things about others even if it incites violence. But the moment it is done towards her, she whines like a dog about it. The sad toddler had her deputy communications director state that “Given the number of threats of death and violence the Congresswoman receives on a near-daily basis, it’s not just irresponsible – its incitement. Facebook should immediately remove these ads which blatantly peddle both anti-Muslim hate speech and disinformation, and AIPAC should apologize.”

She demands an apology for hateful things said about her, but she feels no need to apologize for her mouth. But Facebook had other things to say to the demanding baby. They told her to go fish.

Facebook noted that “the ads did not violate its policies. However, the social network does reject ads that its fact-checking partners determine are false, and the company told Omar’s office in an email exchange that this ad would be eligible for a fact check.” Omar was told that there was no problem since the facts behind the ad are already known to be true.

The AIPAC noted that their ad was utterly “fair and accurate.” They went on to point out that “It is not a personal attack but highlights her outrageous characterization of Israel’s efforts at self-defense as ‘terrorism.’ Israel targets Hamas terrorists, not civilians.” Omar is the one that cannot get her facts straight.

The liberal left thinks that they can say things without having to answer their comments. But the truth is that there are enough organizations that will stand up for fairness and what is right. And there is not a thing that Ilhan Omar can do about it but cry.