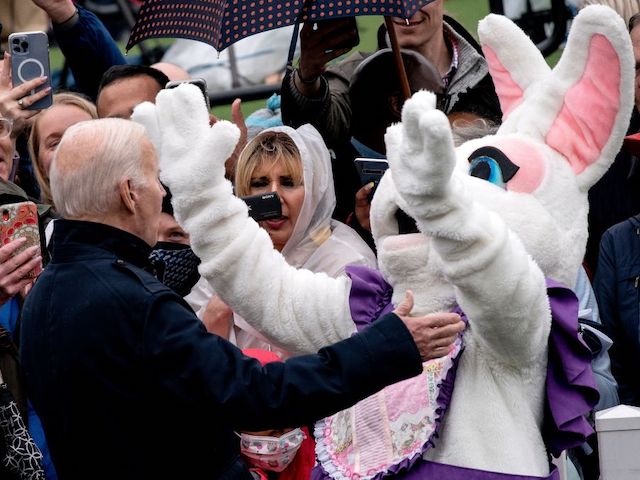 On Thursday, the president appeared to struggle in pronouncing the word “kleptocracy” as he spoke from his teleprompter about the “ill-begotten gains” of Russian oligarchs connected to Russian President Vladimir Putin.

During the speech, Biden appeared to have something in his mouth as he rolled it around inside his cheek while he spoke.

In response, Republicans warned of the urgency in addressing his condition as well as the “alarming” impact it has on America.

“Yesterday, Congress authorized the President to send any weapon, other than a nuclear weapon, to Ukraine,” wrote Rep. Thomas Massie (R-KY).

“Biden has signs of dementia,” he added. “What could possibly go wrong?”

“This is sad to watch,” wrote Rep. Jim Banks (R-IN). “Joe Biden is unfit to be President.”

“Do you think Joe Biden should take a cognitive test? You can take one yourself right here,” wrote TV host-turned U.S. Senate candidate Dr. Mehmet Oz, who shared a link to a cognitive screening test.

After radio host Buck Sexton asked if there was any level of “clear cognitive decline that Democrats would agree is too much for a sitting president of their party,” Senate candidate Jake Bequette responded in the negative:

“Woodrow Wilson had a stroke and literally spent the last 16 months of his presidency as an invalid while his wife and doctor secretly ran the country — so the answer is no,” the former professional football player and Army veteran wrote.

“Biden isn’t the one running the country. He’s totally incapable,” wrote Rep. Ronny Jackson (R-TX), a physician who served as chief medical advisor and assistant to the president. “His cognitive decline is too much and America is suffering because of it.”

“If he won’t take a cognitive exam, then he needs to GO!” he added.

“WHAT is Biden talking about here!? He’s totally LOST,” Jackson wrote in another tweet. “His cognitive decline is so obvious, and America is SUFFERING because of it.”

“This is an EMBARRASSMENT!!” he added.

“@JoeBiden‘s obvious and rapidly worsening cognitive decline is no laughing matter despite every attempt from him and others to laugh it off,” wrote Rep. Byron Donalds (R-FL).

“I can tell you China, Iran, North Korea, Russia, and Venezuela are laughing the most at OUR expense,” he added.

“@DrBiden, this has to end. Stop allowing your husband to be abused,”wrote Vernon Jones, a congressional candidate in Georgia.

“For the love of your family and country, put his health first,” he added. “Take President Biden home before it’s to late.”

A majority of voters believe President Biden is unfit for the presidency and doubt his mental ability, a Monday Harris poll revealed.

Though Biden is nearing 80, he plans to run again in 2024. Biden reportedly told former President Barack Obama he intends to run because he feels he is the only Democrat who can defeat Donald Trump.

His decision to run in 2024 comes as many videos over the last few weeks have shown the president disoriented and confused.

On the Monday after Easter Sunday, Biden had to be guided away from a crowd by an Easter Bunny.