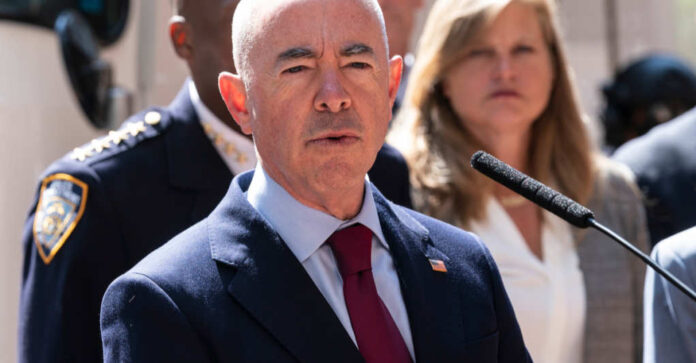 As you likely know, the Biden White House has called for an end to Title 42 immigration policies. Currently, the date for such is set for May. But as that day draws ever closer, those at the head of decision, such as the Department of Homeland Security’s Alejandra Mayorkas, are getting increased criticism.

In fact, on Monday, Mayorkas received a letter from no small number of congressional members noting that his acceptance of the order by Biden calls into question his fitness for office.

As of Monday morning, 134 GOP congress members had signed their names to the letter with an express intention “to address your actions to dismantle the security of our nation’s southern border and disregard for the enforcement of U.S. immigration laws.”

Title 42, which was created during World War II as a public health code, allows the US to deport any and all incoming migrants based on health concerns, regardless of whether or not they have an asylum hearing. When the COVID-19 pandemic began, then-President Donald Trump invoked the code in an effort to stop the spread of the disease in our nation.

However, as the months and now years since then have seen a wane in both COVID cases and deaths, the policy became more of a simple deterrent for the masses coming across the border illegally. And so, it was kept.

Of course, President Biden seems to have no concern whatsoever about the problems at our borders or the record 221,000 crossings and apprehensions that took place in the month of March alone. Therefore, he’s calling for Title 42 to end.

As you might imagine, the mere announcement of such has created even more crossings as of late. And come May, when the policy is officially taken off the table, it is expected by just about everyone involved, including Mayorkas, that we will begin to see numbers that completely dwarf the already record-setting ones of today.

Mayorkas himself has mentioned monthly apprehension numbers that could soon rise to 350,000 to 400,000 – and that’s being rather generous.

Even without the nixing of the policy, it is assumed that more migrants would soon be headed our way. As the Centers for Disease Control and Protection have suggested, we could see as many as 18,000 more apprehensions a day, thanks to their recent elimination of certain COVID protocols earlier this month, according to ABC News.

Just to let you know, that means we have the potential to see a whopping 540,000 or so illegals crossings each month – and those are just the ones that are caught.

And yet, those like Mayorkas don’t seem to have a problem with that. Or any real plan to combat those growing numbers that will soon swarm our already overwhelmed border facilities and agents.

As I believe most of us can agree, with COVID on the run, there is no real need to have “public health codes” like Title 42 in place. However, with the current state of our borders, specifically our overrun southern one, there needs to be some plan in place to mitigate the numbers of illegals trying to gain access to our lands, communities, and jobs.

If Title 42 is to no longer be that plan, then another should take its place. But that’s not what’s happening. Instead, as the congressional letter signee and Republican Study Committee Chairman, Representative Jim Banks of Indiana stated, Mayorkas has “flouted federal law to spread drugs and death in his own country. He and Joe Biden created the worst humanitarian crisis in modern American history, and they did it illegally and on purpose.”

Naturally, this has led many in our nation’s capital and elsewhere to believe that this renders both Mayorkas and Biden “unfit” for office,” as they are knowingly going against our laws and the needs of our people.

Of course, Mayorkas doesn’t see it that way. Hell, he even says he has a plan in place. But that so-called plan is really only to hire a few more agents and increase some resources. No doubt that will help some, but it is nothing like what our border needs.

Come May, it’s likely even Mayorkas and Biden’s most devout followers will also question their fitness for office.