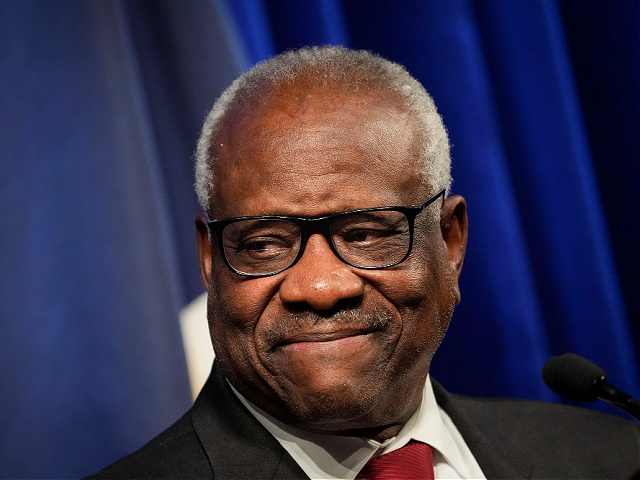 Paoletta spoke to Breitbart News Daily with host Alex Marlow on Friday about how Democrats are targeting Thomas to push for recusal and impeachment standards for justices. As Breitbart News previously reported, sources in Washington, DC, speculate Democrats are focusing their ire on Justice Thomas and his wife Ginni, a conservative grassroots activist, in an attempt to force the most conservative justice to recuse himself from nearly every major issue before the Court.

Paoletta specifically recounted his Wednesday testimony from a House Committee on the Judiciary Subcommittee on Courts, Intellectual Property hearing, in which he defended Thomas’s record and accused Democrats of politically and racially motivated attacks.

“It was just an excuse to have a hearing to go after Justice Thomas for these bogus kind of ethics charges against him, which is that his wife has a career and has opinions, and when she expresses them, he can’t be a judge or can’t rule on any of those issues,” Paoletta told Marlow. “So it’s an absolutely absurd standard. That’s never been applied to any justice or judge in history.”

During a somewhat heated portion of testimony, Paoletta pointed out that Rep. Bennie Thompson (D-MS), who is chair of the House committee investigating January 6, has called Justice Thomas an “Uncle Tom,” a racist trope derived from the Harriet Beecher Stowe novel Uncle Tom’s Cabin. The term is often “used by the left to describe black conservatives as zealously subservient and overeager to win the approval of white people, Breitbart News previously reported.

Paoletta brought up Thompson’s actions when Rep. Hakeem Jeffries (D-NY) asked him to support his “incendiary charge” that the left “hate[s] Thomas because is a black conservative who has never bowed to those who demand that he must think a certain way because of the color of his skin.”

“So that,” Paoletta continued, “is the most vile, disgusting thing you can say.”

The Democrat congressman cut off Paoletta and seemed to defend Thompson’s use of the racial slur, saying, “there are a lot of vile disgusting things that can be said. … The notion that that is, when some members on this side of the aisle and others have been called the N-word throughout different points of our life belies the point that you have a particular bias.”

“And if Chairman Bennie Thompson has an observation to make, he’s entitled to free speech,” Jeffries continued. “You apparently believe that Ginni Thomas, regardless of how many conflicts she has, is entitled to her own political opinions as well.”

Paoletta offered to provide more evidence of the left’s hatred of Justice Thomas, but Jeffries refused to let him continue, shortly replied, “No,” and called on another witness.

During Breitbart News Daily, Paoletta boiled the hearing down to a “multi-year attack” on the Supreme Court because it “finally has a working majority of conservative justices.”

“The left is worried that they’re going to sweep away in the next few weeks, in the next few years — because they don’t control the Supreme Court — lots of liberal landmark rulings,” he said.

However, Paoletta said Americans should not be too worried about Democrats’ scheme to discredit Justice Thomas because “there’s no merit to it.”

“On the ethics thing, Justice Thomas has not had to recuse himself at all under the current recusal standards. Ginni Thomas should continue to do what she’s been doing, which has been being active in the public square. They’re two separate people that have their own opinions and can have their own careers,” he said.

He also noted that performance politics are not popular with most voters, especially when everyday Americans are grappling with the chaos created by the Biden administration.