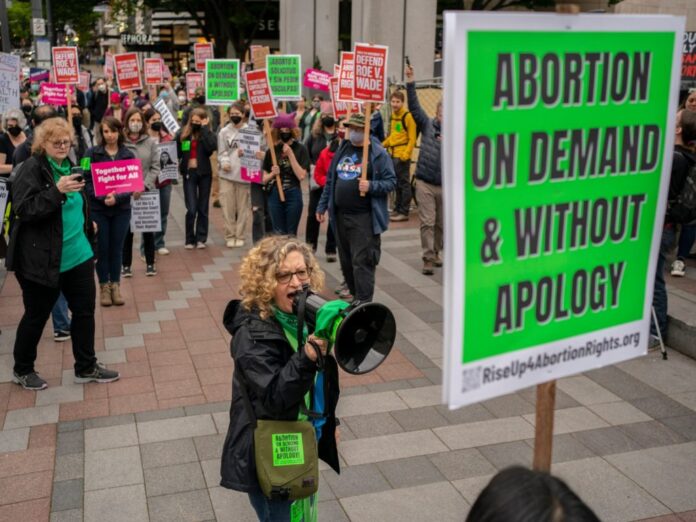 How stupid are you?

No, really, how stupid are you?

Do you enjoy being manipulated?

Do you enjoy being played for a stooge?

Don’t you see what’s going on?

Nearly 50 years ago, after a bunch of old, white men fabricated butchering unborn babies into a Constitutional right, Democrats began using used the threat of Roe v. Wade being overturned to get you to vote for them and send them money.

And for just as long the GOP has said, Yes, we do want to overturn Roe. No shit, dummies.

And what did Democrats do in response? Other than scare you to the polls and take your money, for 50 years Democrats did nothing, nada, not-a-thing, zip, zero, bupkis.

Democrats knew this day could come and did nothing!

A person holds a sign reading “Abortion Saves Lives” as pro-choice activists gather outside the U.S. Courthouse to defend abortion rights in downtown Los Angeles on May 3, 2022. (FREDERIC J. BROWN/AFP via Getty Images)

Over the course of those 50 years, Democrats held the presidency for 21 years and did nothing to legalize abortion legislatively.

For nearly two years, between 2009 and 2011, Democrats held the presidency, the House, and a filibuster-proof majority in the U.S. Senate and still did … nothing!

And now you’re mad at us?

We have NEVER deceived you with our intent to end this atrocity.

For 50 years we have been 100 percent upfront and honest about our burning desire to end this holocaust.

All we did was what we said we were going to do. We suited up, ran on the field of play, and fought like hell to bring it into the endzone. Where were your guys? They didn’t even show up to play. They were too busy in the stands hustling you for money and votes.

Don’t you get it? The issue of abortion means nothing to Democrats. This deeply unprincipled party cares only about power and if obtaining power means allowing a problem to fester rather than solve it, they are going to allow that problem to fester.

Am I getting through to you?

Do you understand the words that are coming out of my mouth?

For 50 years, Democrats have used you in the same way too many Middle Eastern countries use the Palestinians. The Palestinian problem could have been easily solved a hundred times, but their so-called leaders and the countries that hate Israel want to keep the Palestinians poor and miserable to achieve a broader goal — the destruction of Israel (which I know most of you agree with, so ha ha).

Pro-choice activists march in protest after gathering outside the US Courthouse to defend abortion rights in downtown Los Angeles on May 3, 2022. (FREDERIC J. BROWN/AFP via Getty Images)

A demonstrator holds up a coat hanger, a symbol of the reproductive rights movement, and a sign reads “Never Again” as pro-choice protesters gather in large numbers in front of the federal building to defend abortion rights in San Francisco on May 3, 2022. (NICK OTTO/AFP via Getty Images)

For 50 years Democrats have refused to solve the abortion issue legislatively, have kept you ginned up, have taken your money, have placed you on tenterhooks, have refused to resolve the problem to a achieve a bigger goal — obtaining power through your money and manipulated votes.

You have no more right to be angry with us than if your team lost by forfeit. You want to know why…?

Because Democrats forfeited on this issue for a half-century.