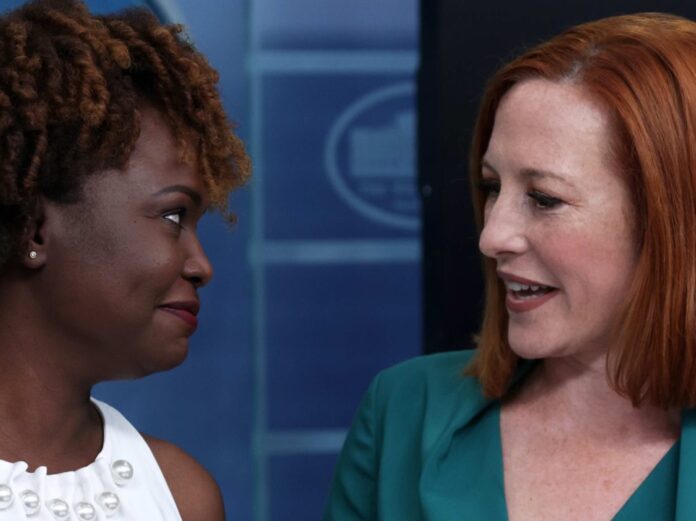 Jean-Pierre’s appointment was hailed as “historic,” since she will be the first black woman and “out” LGBTQ person to serve in the role. However, there are several facts about Jean-Pierre’s record of radical politics that might prove to be more important than her skin color or her sexual preference. Here are five facts:

1. Jean-Pierre worked for radical organization MoveOn.org. MoveOn.org, launched in the late 1990s to oppose the impeachment of President Bill Clinton, pushed, ironically, for the impeachment of President Donald Trump, abandoning its former principles. The group also infamously accused General David Petraeus, then commanding U.S. forces during the Iraq War, of betraying the country. Jean-Pierre worked for MoveOn.org from 2016 until the 2020 presidential campaign.

2. Jean-Pierre has a history of anti-Israel radicalism. In 2019, Jean-Pierre applauded Democratic presidential candidates for boycotting the annual American Israel Public Affairs Committee policy conference in Washington, DC, a prominent pro-Israel gathering. “You cannot call yourself a progressive while continuing to associate yourself with an organization like AIPAC that has often been the antithesis of what it means to be progressive,” Jean-Pierre wrote.

3. Jean-Pierre once said that no one who has been merely accused of sexual misconduct should seek public office. Jean-Pierre told Jake Tapper on CNN’s State of the Union in 2017 that even if there was no corroborating evidence, and nothing had been proven against the accused, the mere existence of the accusation should be disqualifying. Ironically, she went on to work for Biden, even after he had been credibly accused of sexual misconduct by former aide Tara Reade.

4. Jean-Pierre is married to CNN anchor and correspondent Suzanne Malveaux. Jean-Pierre is only the latest example in a pattern of high-level personal ties and romantic links between Democrats and the media, as documented by Breitbart News editor-in-chief Alex Marlow in his 2021 blockbuster Breaking the News: Exposing the Establishment Media’s Hidden Deals and Secret Corruption. CNN will continue to be, in effect, the Biden administration’s communications shop.

5. Jean-Pierre stoked racial divisions and fears when Donald Trump took office. She told Bill Maher on HBO’s Real Time, “I think the thing to understand is that, if you are not white, male, straight, you are — you fear a — Donald Trump’s presidency because there is no place for you in a Donald Trump’s presidency.” She later claimed that Trump wanted to put a “whites only” sign on the Statue of Liberty, and claimed Trump had been a lifelong racist, despite evidence to the contrary.