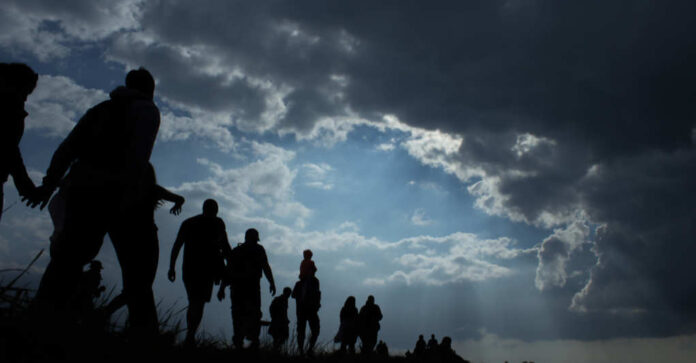 The president has proven that he values the illegal over the people who can legally call America home. Donald Trump built a wall that would secure the border. Joe Biden took it upon himself to remove all the protective regulations that kept the illegals from being able to walk right into the country. But Biden killed the project because he secretly wanted to open the border and let illegals walk right into the country.

Biden claims that he wants to have a secure border but refuses to put a stop to illegals pouring over the border. The president’s message is sending to people living south of the border is that they can come right into America without much effort. But the issue of Title 42 keeps the man from achieving his anti-American goal of open borders.

Alejandro Mayorkas is Biden’s man that runs Homeland Security. He agrees with the president’s philosophy of open borders. The message that he is sending to the world is that the people need to stay away until Joe Biden can remove Title 42, which will allow him to let everyone into the country.

Mayorkas stated that “What happens now is individuals are either expelled under the Title 42 authority or they are placed in immigration enforcement proceedings. And they are removed if they do not have a valid claim under our law to remain. And so the border is not open. And importantly, they should not place their lives at risk in the hands of smugglers who exploit their lives for the mere purpose of profit.”

The Homeland Security Secretary wants people to think that he cares about securing the border. But his words were directed to the illegals that Biden wants to bus into the country’s interior. Mayorkas does not care about Americans or what millions of illegals will do to the country. He cares about getting the message out that people need to wait until Title 42 is removed.

Mayorkas also stated that “Precisely why our plan calls for a regional approach to what is a regional challenge. We need countries to the south to manage their borders. This is not a phenomenon that the United States experiences alone. There are 1.8 million Venezuelans in Colombia. The Nicaraguans comprise almost 2% of the population in the small country of Costa Rica. We’re seeing migration because of challenges that are not restricted to this area. They are global.”

Biden and his people all know that winning the midterm elections is vital to their future and the ability to strip freedoms from Americans. They are all willing to make claims contrary to what their actions are declaring about their beliefs. Mayorkas tells people that they should not come, but deep inside, he wishes that Title 42 was removed.

Biden also claimed that his team had the border under control. But the facts tell a different story. The border’s only security in place is significant because Republican governors have taken up the fight and secured their part of the border. Joe Biden has not lifted one finger to help them out. The only thing the old man has done has been to make it hard for the states to secure their parts of the border.

Mayorkas tried to make it seem like multiple federal agencies all had their hands in securing the border. But the federal agencies are sluggishly engaging the border because they are all run by Biden lovers. And these people are not willing to do what is right because they fear the president and the fact that he would replace them with someone else.

Title 42 is the last line of defense used to force people to go back to the south. Biden has removed the ability of agents to arrest and deport illegals by limiting what law enforcement can do. Mayorkas has lied to the American people with what he has said. Biden’s ultimate goal is to open the border and destroy the country. And he will have his people say anything to get people to think that he is doing his job.