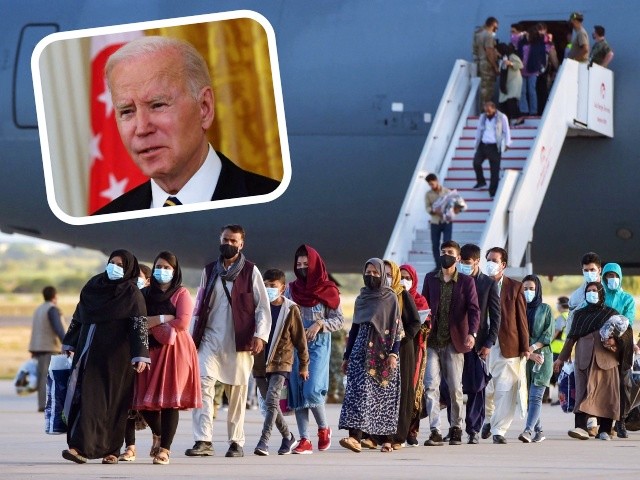 At least 100 Afghan refugee families who were dropped off in California are still living in hotels, according to a May 8 report in Spectrum News 1.

“The problem with housing is that … they need credit,” [aid worker Mahmood] Omid told Spectrum News 1. “They also need someone to have income, to work here and to provide the required document,” he said May 8.

“Among the families that IILA [International Institute of Los Angeles] received and placed into our community, we have between 75 and 80 families who are still in hotels,” [Lillian] Alba said, adding that most of these families are in L.A. County.

“We’ve had landlords request six months of rent up front, so we’ve had families who were asked to come up with $30,000 dollars so they could move in,” Alba said.

If Congress delivers more migrants, “We just will not have the capacity to provide the adequate support that the families will need,” Alba predicted.

But the 70,000 Afghans, plus the expected 100,000 Ukrainians — alongside the inflow of Haitians, Cubans, South Americans, Central Americans, and Africans — are also helping to worsen housing shortages. In turn, the shortages bid up housing costs for Americans — and generate extra wealth for landlords and real estate investors.

In many cases, several or many low-income migrants share an apartment or house, so allowing them to price middle-class American families out of good housing.

Refugees arrive at Dulles International Airport after being evacuated from Kabul following the Taliban takeover of Afghanistan August 27, 2021 in Dulles, Virginia. (Chip Somodevilla/Getty)

“Rents continue to rise at the fastest pace in decades, making housing costlier than ever for many Americans,” the Washingon Post reported on April 21:

Nationally, rents rose a record 11.3 percent last year, according to real estate research firm CoStar Group. That fast pace of growth remained elevated in the first months of 2022, as many parts of the country continued to notch double-digit jumps in rent prices.

“In 49 states, the District of Columbia, and Puerto Rico, the average renter earns less than the average two-bedroom Housing Wage,” according to a 2021 report by the National Low Income Housing Coalition. The coalition is allied with the Democratic Party, and its 291-page report does not mention the impact of immigration.

“We estimate that in (Poland’s) largest cities, rental prices are currently about 20% higher than at the beginning of the year,” [Martin] Janczuk [from local real estate firm Metrohouse Franchise] said, adding that the refugee influx was just one of many reasons for the growth.

The impact of migrants on local housing costs is hinted at in many press reports.

Afghan refugees arrive at Dulles International Airport in Dulles, Virginia, after being evacuated from Kabul following the Taliban takeover of Afghanistan. (Olivier Douliery/AFP via Getty)

In Maine, the BangorDaily News.com reported May 4 on the impact of government-imported refugees on the housing market, where Charles Mugabe, a director with Catholic Charities Maine’s Refugee & Immigration Services program, settled more than 260 refugees since October 2021:

“That was a challenging process to be honest,” Mugabe said. “At the moment, not only Portland, but [apartments in] cities like Westbrook, South Portland, Lewiston, Auburn and Augusta have gone extremely high, to the point where it is nearly unaffordable.”

Usually with no sources of income because they just arrived in the U.S., most of those being resettled rely on state or federal housing assistance.

“Afghan evacuees who have resettled in the Washington [D.C.] region after fleeing the Taliban are now struggling to pay their rent and stave off eviction after grappling with unemployment and exhausting the limited government aid they have received,” the Washington Post reported on April 25. The article continued:

In one case, four ex-members of the Afghan military received an eviction warning, saying they had 10 days to come up with $4,592 in back rent for their Prince George’s County apartment that they were told the resettlement agency that placed them there never paid.

In another, a family of seven in Alexandria was informed by their resettlement agency that, starting in May, they were responsible for their $2,700 rent, even though neither parent has been able to find work.

The Post article was headlined: “Afghan evacuees … struggle with rent after running out of aid.”

Further south, WPIN.org reported on May 3:

Lydia Yousief, director of the Elmahaba Center, works with people in Nashville’s Arabic-speaking community, and says many of them are also being priced out of their neighborhoods. She refers to this phenomenon as a “second displacement” for immigrants, who’ve already uprooted their lives from another country.

The federal government is also worsening housing problems in the Midwest.

“Refugee families are typically among the severely housing cost-burdened renters trying to navigate the extreme shortage of rental units as they work to create a new life here in the United States,” said David Zverow of Refugee Action Network, according to an April 21 post by Housing Action Illinois.

The post said roughly 300,000 “extremely low-income renter households” — including many working Americans- are “spending more than half of their incomes on housing, with little left over for other basic necessities.”

City leaders in Detroit, Buffalo, and St. Louis are also spending money to recruit migrants who can replace the American population lost amid federal economic and immigration policies that move jobs to China and wealth to Wall St. Even though most are poor, the imported refugees help boost local rents and consumer spending, often with the aid of federal welfare.

Some families struggle to find housing, he said. They need legal services, jobs and transportation. For [Afghan-born Said] Urahman, Detroit represents a “new chapter” in his life. He described the city as a “wonderful place” for immigrants.

Urahman spoke during the Wednesday launch of a new program for refugees arriving in Detroit that can help them tap into support services — from housing and legal services to transportation and employment assistance — as they resettle in a new home.

The vast majority of imported refugees — including Ukrainians and Afghans — get some funding from taxpayers.

But there is no direct aid for the huge inflow of migrants who are allowed across the southern border. Yet their inflow delivered more than 1 million people — or perhaps 200,000 households — in 2021, so helping to push up housing costs for many Americans.

A Spanish-speaking Mexican migrant, Jose Ricardo Ballona, told WPIN.org that redevelopment forced him to settle in Millersville, 15 miles north of Nashville, but his housing costs have doubled to $1,000 a month:

He moved to Millersville late last year, after his mobile home park on Dickerson Road in East Nashville was sold to a developer. “Fue algo muy dificil,” Ballona says. It was really difficult.

The transfers of wealth from Americans to imported refugees — and their U.S. landlords — are difficult to track. But in Redmond, Washington, the local government is so eager for new refugees that it is pushing American homeless people back onto the streets, according to an April report by King5.com:

King County is planning to use the Silver Cloud Inn in Redmond as temporary housing for those fleeing to the U.S.

The hotel, purchased in July 2021, is a part of the county’s Health Through Housing initiative, which looks to purchase hotels and apartment buildings to quickly stand up supportive housing for the chronically homeless throughout the region.
[…]

The county said that using the property for refugees will not delay the implementation of the Health Through Housing plans. The hotel will reopen as permanent supportive housing by the end of the year, according to the county.

The pro-migration chief of the Department of Homeland Security, Alejandro Mayorkas, is also importing migrants via loopholes in the law.

For example, a lawfully deported Honduran woman “and [her two] children are living in a windowless homeless shelter a two-hour bus ride from the girls’ schools, after a government program brought her to the United States earlier this year,” Reuters reported May 3. The report continued:

Of the 200 families the task force has so far reunited, including Hernandez and her daughters, around three-quarters have struggled with housing insecurity, according to previously unreported data collected by two groups that aid them, Together & Free and Seneca Family of Agencies.

In the early hours of the morning, while she takes the girls to school, Hernandez said [her son] Maynor drives around Los Angeles delivering oranges he sells to make ends meet so that he doesn’t lose clients while they work on the renovation during the day. The shelter recently made space for Maynor and his truck, after a period in which he slept in the vehicle on the street, keeping guard over the oranges.

Extraction migration also distorts the economy and curbs Americans’ productivity, partly because it allows employers to use stoop labor instead of machines. Migration also reduces voters’ political clout, undermines employees’ workplace rights, and widens the regional wealth gaps between the Democrats’ coastal states and the Republicans’ Heartland and southern states.

Not surprisingly, the wealth-shifting extraction migration policy is very unpopular, according to a wide variety of polls. The polls show deep and broad public opposition to labor migration and the inflow of foreign contract workers into jobs sought by young U.S. graduates.