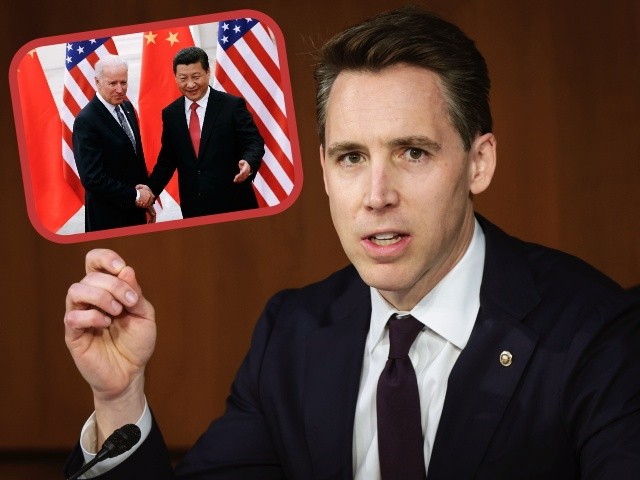 In recent weeks, a number of Biden officials have suggested that the administration cut Section 301 U.S. tariffs on China-made products. Treasury Department Secretary Janet Yellen, for instance, said last month that cutting U.S. tariffs on China is “worth considering.”

“There would be some desirable effects,” Yellen said. “It’s something we’re looking at.”

Hawley, in a letter to U.S. Trade Representative (USTR) Katherine Tai, urges the Biden administration to drop the “misguided policy proposal” noting that tariffs are intended to “level the playing field for American workers and communities which have long suffered from unfair practices perpetrated by China after its accession to the World Trade Organization in 2001.”

I write with concern about recent comments from Biden Administration officials that indicate a desire to cut tariffs on goods imported from China. I urge you to reject this misguided policy proposal. I further write to inquire about the status of a new Section 301 investigation into the malicious economic practices deployed by the Chinese Communist Party, which harm American workers and industry and must be combatted with the full weight of your office. [Emphasis added]

Tariffs on Chinese goods enjoy broad support among the American people. Unfortunately, certain officials within the Biden Administration seem to disfavor them, and have, in recent weeks, suggested they be cut. Deputy National Security Adviser Daleep Singh has said that tariffs on consumer goods from China “serve no strategic purpose.” In addition, Treasury Secretary Janet Yellen, a longtime critic of using tariffs to rebalance our trading relationship with China, has said that scaling back tariffs on Chinese goods is “worth considering.” [Emphasis added]

Tariffs on Chinese goods are important tools our nation must use as part of a long-term strategy in its geoeconomic competition with China. I therefore urge you in the strongest possible terms to use your influence within the Biden Administration to reject the short-sighted position advocated by your colleagues. As you told Congress earlier this year, cutting tariffs would relinquish leverage at the negotiating table with China–leverage you must maintain and fully deploy, especially after China’s failure to abide by the purchase agreements it made under the Phase One trade deal. To cut tariffs at this juncture would be a strategic blunder. Not only would it reward China for its latest act of deceit, but it would give them a green light to do so again in the future. [Emphasis added]

In addition, Hawley requests the Biden administration swiftly open a Section 301 investigation into China’s trade practices in the U.S. market, which include “state-directed industrial subsidies in strategically important sectors which unfairly benefit Chinese firms and degrade their American competitors.”

“The possibility of such an investigation has been reported since at least September 2021,” Hawley writes. “However, as of yet, your office has failed to act. This is unacceptable. The longer you wait to investigate and address these practices, the more damage will be done to American workers and industry. You must act with haste.”

Already, the Biden administration has eliminated U.S. tariffs on more than 350 China-made products — a major win for multinational corporations that have long outsourced manufacturing to China.

In one West Virginia town, 94 percent of jobs were offshored to foreign countries thanks to free trade deals like the North American Free Trade Agreement (NAFTA).