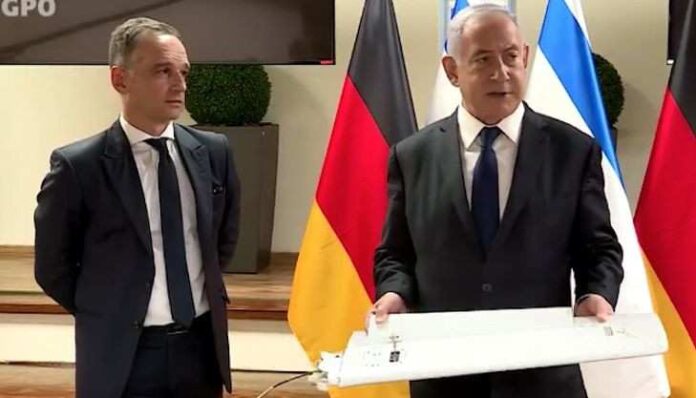 Netanyahu has spoken out about the drone that was intercepted, claiming that Iran is the real enemy in this war. As for the rest of us, we are saying the obvious…..no kidding! This is what we knew all along and it is sad that someone needed to come out and say it.

Hamas may have the ability to manufacture some of their own rockets and missiles but they have some very powerful allies. Tehran and Pyongyang are both clearly offering up their assistance. An armed drone was eventually downed by the IDF, which was launched from either Syria or Iraq. The drone was also made and run by Iran.

“JUST IN – Israel’s Netanyahu: The true backer of much of this aggression is Iran. They provide financing and weapons to Hamas and Hezbollah. They sent an armed drone to Israel from Iraq or Syria,” tweeted disclosetv. Bloomberg also has more about the latest dispatch from Benjamin Netanyahu:

The drone was dispatched from either Iraq or Syria and intercepted at Israel’s border with Jordan, Netanyahu said at a meeting with German Foreign Minister Heiko Mass in Tel Aviv, according to Bloomberg.

JUST IN – Israel’s Netanyahu: The true backer of much of this aggression is Iran. They provide financing and weapons to Hamas and Hezbollah. They sent an armed drone to Israel from Iraq or Syria.pic.twitter.com/RjI9eSnwLz

Netanyahu, however, did not provide evidence to bolster his claim, other than holding what he said was part of the unmanned aircraft, the outlet noted.

The prime minister accused Iran of backing and financing the Islamic Jihad in Gaza, in addition to providing weapons to the Palestinian militant group Hamas and the Lebanese militant group Hezbollah, Bloomberg reported.”

We presume that the IDF will be providing evidence of the drone soon enough. Let’s say that the claim is legitimate. This will serve as a valuable reminder to the neighbors of Israel: the threat that Iran is currently posing will be more dangerous than ever.

When rockets are being fired from southern Lebanon, this also goes a long way towards bolstering Netanyahu’s case. The drone’s origin does not matter. Netanyahu may also be speaking with a domestic audience in mind. Opposition parties have started to balk in the wake of the rocket attacks from Hamas.

“Israeli opposition leader Yair Lapid criticized Prime Minister Benjamin Netanyahu for what he said was failure to heed the requests of the U.S. government to call for a cease-fire with Hamas, saying Netanyahu is putting the U.S.-Israel relationship in jeopardy.

The U.S. has called for Israel to end the fighting and agree to a cease-fire. Netanyahu has refused the requests, and appears determined to inflict maximum damage against Hamas in a war that could save his political career, the Associated Press reported.

“After 11 days of this operation, every Israeli citizen will ask themselves: What did the government really want to achieve with this military operation? What is its policy and strategic long-term aim concerning Hamas in Gaza?” Lapid wrote.”

Why is Lapid so concerned all of a sudden? We are not sure but they will have lots of ammunition to continue their criticisms if the conflict continues. As for Hamas, they are leveraging the fight, so that they are able to call Fatah and Abbas cowards. “It seems that the Palestinian Authority and Fatah are currently in a hibernation,” the Hamas spokesperson told Newsweek.

Finally, we are also given insight into the real reason for Hamas conflict with Israel:

“Hamas’ sustained popularity loomed over what would have been the first Palestinian elections in 15 years scheduled for last month, but Abbas postponed the vote, citing Israel’s refusal to allow elections in Jerusalem.

Hamas decried the move as “a coup.”

This is essentially a conflict between two different terrorist groups. Hamas views themselves as the true defenders of the Al-Aqsa Mosque and if they ever win full control of the Palestinian Authority? The annihilation will be massive.