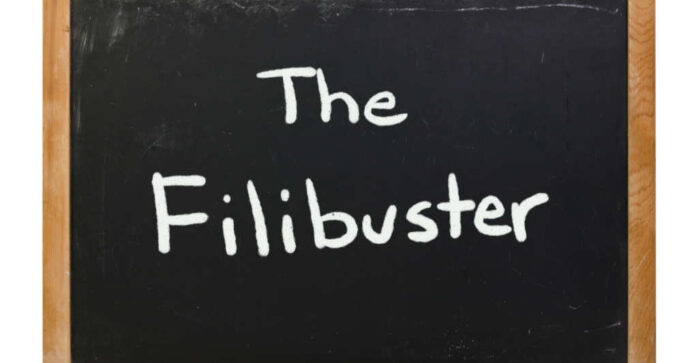 The Democratic Party has sought to remove the filibuster that demands 60 votes to pass a bill. The filibuster’s existence prevents one political party from running away with the country and instituting wild laws every time a new administration takes over. The Democrats love having it in place when the Republicans are in the majority. But they hate the protective measure when there are bills that they want to force through.

Speaker of the House Nancy Pelosi takes a moment to put her wrinkly old face to the abortion issue. She claims that former Majority Leader Mitch McConnell would remove the filibuster when the time came to confirm Supreme Court Justices. Her reasoning behind her statement is that the Democrats should remove the filibuster so they can institute laws that would favor abortion.

Her accusations against McConnell are politically motivated because she needs to look powerful in the upcoming midterm elections. She acts like McConnell knew that the court was going to overturn Roe v. Wade, and that is why the Republicans needed a conservative court. She claimed that McConnell wanted to confirm the new justices at all costs, and that is why he removed the filibuster.

Newsbreak reported that “Speaker of the House Nancy Pelosi said Senate Minority Leader Mitch McConnell’ pulled back the filibuster rule’ so he could get conservative judges approved onto the High Court for political gain.”

Pelosi’s accusation was that “Mitch McConnell pulled back the filibuster rule to have those justices confirmed by 51 by not needing 60 votes by 51. So this is a political decision on the part of this- the rule of law in our country should be respected. Women should be respected to make their own judgments with their family, doctor, and God.”

The Democrats quickly demand law and justice when their nastiness is on the line. They are quick to forget their statements when they are in power. They conveniently forget their words when they control all the cards and enact regulations against the Constitution. They also complain and whine when their illegal actions are challenged in court.

Mitch McConnell cannot be blamed for protecting the country from the Democrat’s attacks. The liberals want to change America into a failed socialist state where they rule from Washington. The new order would use force to control the people and eradicate any resistance to their power.

Former President Donald Trump knew full well that the current court makeup was hysterically lopsided in favor of the liberals. He appointed more judges than anyone else and ensured that the Supreme Court would stay conservative for generations to come.

Trump and McConnell worked together like politicians should and confirmed Judges Neil Gorsuch, Brett Kavanaugh, and Amy Coney Barrett. All three of these judges rule the way the Constitution dictates. They do not rule the way their political party wants them to rule.

The liberal judges have the terrible habit of making judgments based on what their Democratic overlords dictate to them. The Democrats have long despised established law and seek to change it to favor their horrible agenda.

The Democrats do things that promote the socialist agenda. They are willing to remove the filibuster every time they want to pass a bill. But they love the filibuster when it stops the Republicans from fixing the country.

The Democrats are a very self-serving party. They want to do things that allow them to control people and promote the things they want in a place to gain more power.

The Supreme Court’s position on Roe v. Wade has them running scared because it will remove their ability to kill unborn children and promote the liberal concept that humanity has the right to do whatever they want and not have to answer to any higher power. Nancy Pelosi knows that the red wave will see that she is removed from her position in the House, which will effectively make Joe Biden a lame-duck president.