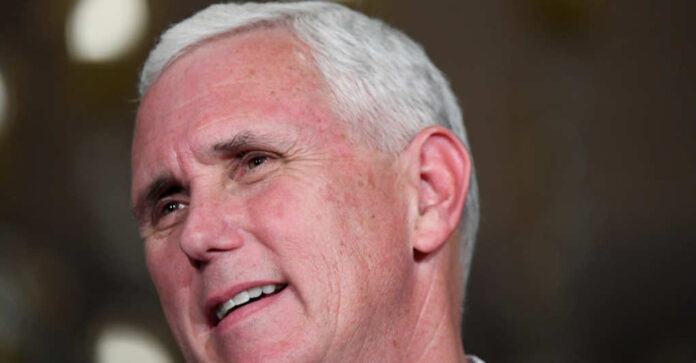 The media has largely ignored the former Vice President Mike Pence. They have instead tried to draw attention to trivial matters to keep attention off of the terrible job that Joe Biden is doing as president. But the media had no choice but to report on Pence’s latest push to reach Latino voters with a new campaign ad in Spanish.

The Republican Party is trying to reach as many Latino voters as possible to let them know that there is a party that stands for them. Pence’s ad will air in critical Democratic-controlled areas in the Nevada area. Susie Lee, Steven Horsford, and Dina Titus are the Democrats facing pressure from Pence’s ad campaign.

The total campaign is set to cost $10 million. Pence wants the campaign to focus on the energy police that Biden has failed to develop.

The new ad shows a woman speaking out against Biden’s decision to send his people to Venezuela to try and work out an energy deal with them. The woman was a person that fled Venezuela because of the leaders that denied the freedom to people and pressured them into submission.

Alessandra Torres is the woman featured in the ad, and she is quoted as saying, “We don’t need that radical, environmental agenda. America needs energy independence. Tell Congress to support American energy production, not dictators who hate freedom.”

The name of Pence’s organization is Advancing American Freedom. Their push is to target critical areas where the Democrats hold a slight lead. Pence knows that the small lead the liberals have in the key areas will disappear once the Latino community realizes the truth. People are tired of the Democrat’s way of leading the country into ruin.

Pence stated, “It’s time to demonstrate American leadership and unlock American opportunity by supporting American energy production that will lower prices at the pump and provide much-needed financial relief to the nation.”

There is no reason why Joe Biden should be canceling oil contracts and messing around with current energy production. He cannot stand to see America develop into an energy-independent country. He thinks that America needs to depend on other countries that hate freedom.

Mike Pence has made it his goal to help campaigns in critical areas. His motivation and attention are just enough to gain the attention of people that are on the line with knowing who to vote for. Pence’s thrust is to get the truth out regarding the betrayal of the Democratic Party and their goal to join forces with evil nations.

The Republican Party knows that they must reach Latino voters to turn blue districts red in the midterm elections. Latino voters are very concerned about how the economy is headed and how high prices are climbing. Many Latinos have come from areas ruled by socialists that drove inflation through the roof and watched how it destroyed their home countries.

The problem Republicans are facing with Latino voters is the language barrier. They have tried in the past to speak Spanish but failed to deliver their message. The thrust now is to target Latino voters by using Spanish-produced material and videos that clearly explain what is at stake in the upcoming midterm election.

Pence knows what he is doing by using Latinos that have fled socialist-run countries. The message he wants people to know is that Joe Biden is doing the same thing to America that evil leaders did to their homelands. The message reminds them that the only way to stop tyranny in America is to vote for candidates that promote freedom.