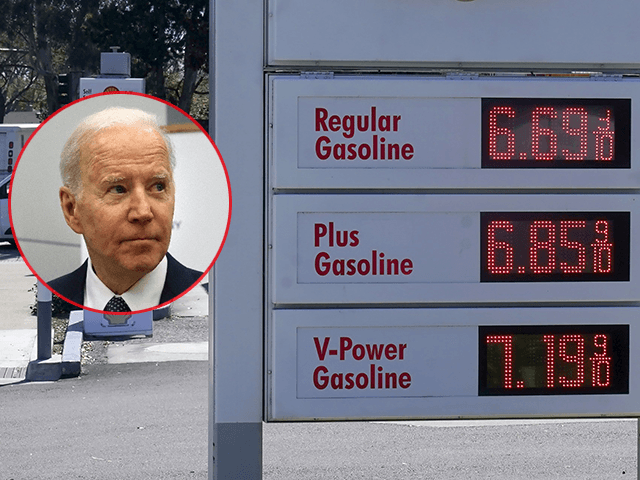 Wednesday’s records were nearly 50 cents up from a month ago when prices for regular hovered around $4.087 nationally.

Democrat-run California has the heftiest prices in the country. The cost for a gallon of regular gas in the Golden State averaged an astonishing $6.05 on Wednesday, marking an all-time high. Diesel also shattered the state record at $6.57 per gallon.

The following states rounded out the top in terms of highest gas prices in the country:

The Biden Administration has repeatedly deflected responsibility for the exorbitant costs. In March, President Joe Biden said, “Can’t do much right now,” when he was asked about rocketing expenses at the pump while also blaming Russia, as Breitbart News reported.

“They’re going to go up,” he said when asked if he had any words for the American people regarding the crisis.

On May 9, Biden doubled down on his Russia deflection, as Breitbart News noted:

Biden spoke about how in 2021, the used car market was artificially high because of a shortage of available computer chips.

“This year we have a similar problem, but it’s because of energy because of Putin’s gas tax,” he said, describing the tax as “the gas tax of him causing such a disruption in oil markets around the world.”

While Biden is quick to place responsibility on Russia, his “administration has ceased all oil and gas leases to Alaska’s Cook Inlet and the Gulf of Mexico as of” May 11, Breitbart News noted.