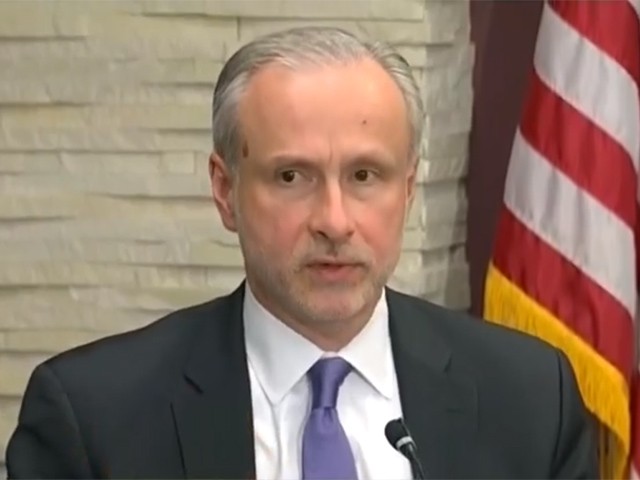 The testimony is crucial to Special Counsel John H. Durham’s case against Sussmann, who alleged that Trump was linked to Russia via Alfa Bank. The FBI investigated the claim and found it to be baseless.

Durham’s prosecutors have claimed in court that Sussmann intended to reveal an “October surprise” against Trump in the 2016 election. Indeed, Clinton aide — now National Security Advisor — Jake Sullivan issued a statement about the allegations that Clinton tweeted in October 2016.

That tweet came just days after then-FBI Director James Comey announced that he was reopening the investigation into Clinton’s improper use of a private email server during her time as Secretary of State, and just days before the election itself.

Already, in pre-trial motions, Durham had revealed the existence of a text message from Sussmann to Baker asking for an urgent meeting, and adding: “I’m coming on my own – not on behalf of a client or company – want to help the Bureau.”

On Thursday, Baker authenticated that message and added additional testimony, which corroborated testimony from earlier witnesses from the FBI, who all said that they believed or had been told that Sussmann was operating on his own.

Sussmann was allegedly working for the Clinton campaign at the time, and allegedly concealed that knowledge.

As the New York Post notes, the result of Sussmann’s alleged lie was that the FBI considered him a trusted confidential source, which in turn meant that the FBI did not further investigate to determine the source of Sussmann’s information.

John Haughey of the Epoch Times also noted that Sussmann’s alleged lie meant that others within the FBI were more inclined to regard him as a credible source.

Judge Christopher Cooper, a Barack Obama appointee, has been criticized for a number of decisions favorable to the defense, including refusing to eliminate jurors who have donated to Democrats. On Thursday, the judge refused to remove a juror whose daughter participates on the same high school rowing team as Sussmann’s daughter.

Baker was previously investigated for alleged unauthorized leaks of information from the FBIO to the media.