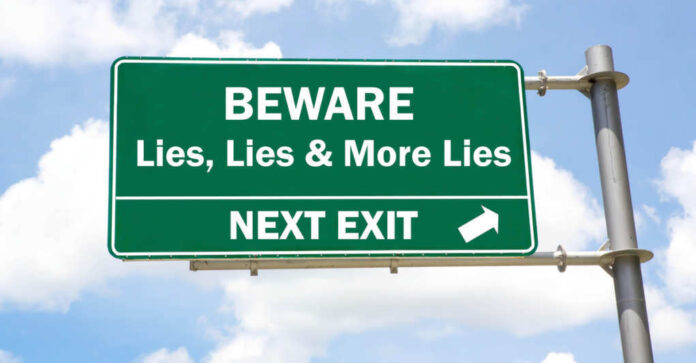 Didn’t the Biden Administration just form a governance board to do away with disinformation? That board might need to take a cold, hard look at a recent statement put out by the White House about vaccines that are so false that even CNN and the Washington Post fact-checkers asked Biden’s team to delete the misinformation.

The Twitter account that is officially from Biden’s White House recently posted information in which they claimed that there was no COVID-19 vaccine available when the president took office in January of 2021. This position was previously made when Vice President Kamala Harris said that the Biden administration had to start from scratch when they took office.

The Twitter statement read, “When President Biden took office, millions were unemployed and there was no vaccine available. In the last 15 months, the economy has created 8.3M jobs and the unemployment rate stands at 3.6% — the fastest decline in unemployment to start a President’s term ever recorded.”

The irony of this is that Joe Biden himself received his first vaccine for COVID-19 in December of 2020 before he was inaugurated. He even tweeted about getting the shot and praised the scientists and researchers who had worked tirelessly to make it possible. He got his second shot in January, this one was before he took office as well. The White House shared a video of Biden receiving the vaccination.

According to the Our World Data website, there were almost 19 million in the United States who had received at least one dose of the COVID-19 vaccine by the day Biden was inaugurated. And there were 3.5 million Americans who had been fully vaccinated by January 20, 2021, the day Biden took office.

Glenn Kessler is a fact-checker for the Washington Post, and he is usually very friendly to the Biden administration. But with this level of disinformation, he said, “Who’s manning the @WhiteHouse Twitter account? Delete this false tweet. Biden himself has said 8% of seniors had gotten the vaccine on the day he took office. Biden was one of them.”

And another usually friendly voice, Daniel Dale from CNN wrote, “‘There was no vaccine available’ is very clearly false. More than 3 million Americans were fully vaccinated and more than 18 million had at least one dose by Biden’s Inauguration Day. Biden himself was fully vaccinated. Obviously became more widely available with time, but no doubt, and they’re free to tweet ‘the vaccine wasn’t available to much of the public or whatever. ‘There was no vaccine available,’ the end, goes way too far given that there were nearly 19 million people with shots, wrongly suggesting the whole rollout began under Biden.”

These two guys were not alone, there was a fury of reactions on Twitter to the White House’s false information. Many of them challenged Biden’s Disinformation Governance Board to take action. There was a call for the director of this board formed under the Department of Homeland Security to respond. Nina Jankowicz has been referred to as the “minister of truth,” or the “misinformation czar.” People want her to correct the gross mistake.

Another CNN contributor, Scott Jennings, reminded the public that they were giving one million shots a day when Biden was sworn in. He said that the White House isn’t even trying anymore.

We haven’t even looked at the responses that came from Republican leadership. Rep. Dan Crenshaw from Texas demanded that the tweet be deleted and that Biden stop disgracing the office. And Rep. Elise Stefanik (R-N.Y.) said, “The Communist Ministry of Truth is in full force.”