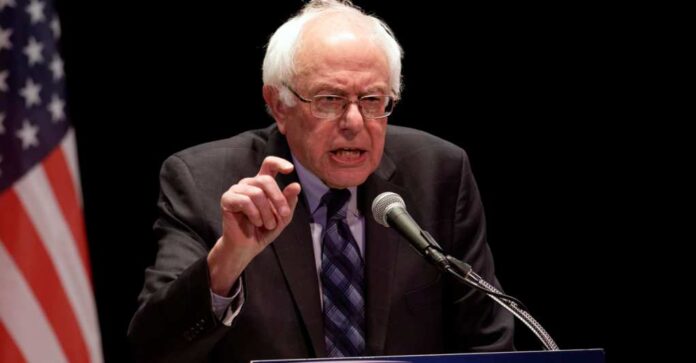 If you know anything about Democrat Senator and twice-failed presidential candidate Bernie Sanders, it’s likely that he is just about the farthest left politician in today’s political arena. It’s something he’s been quite proud of for a number of years.

In fact, he’s one of the very few people brave enough to publicly describe themselves as a “democratic socialist.” Perhaps if he hadn’t declared himself as such, he would have actually won one of his failed presidential campaigns. Then again, it was that far leftness that has always seemed to put him on the board at all.

But over the years, it seems he has become more and more hypocritical, no doubt as he gained more and more wealth and influence, both things that, as a socialist, he swears shouldn’t be a thing.

Take a recent trip he made to Pennsylvania, for instance.

As you can imagine, Sanders is always willing to help out a fellow socialist. After all, as I mentioned above, they are few and far between in the US. And so, it’s no great surprise that when far-leftist Pennsylvania Representative Summer Lee announced a run for re-election, Sanders was one of the first to endorse and support her efforts.

This past week, he even flew to her home state to speak on her behalf. The kicker is that he did so sitting in a first-class seat…

According to Fox News, “Sanders, masked up, appears to be sitting near the front of the plane in photos obtained by a fellow first-class passenger.”

It may not seem like a big deal for a man as high up on the political food chain and with as much name cred as Bernie Sanders to fly first class. After all, a man that’s run for the White House twice and been “in office” for as long as he has can’t exactly be expected to ride in the back of the plane with the common folk, can he?

But for a self-declared socialist, a big deal is precisely what this is.

And it’s made into an even bigger deal by the fact that he was flying to go support another socialist candidate, and one Sanders told WTAE-TV would work hard to “fight” for the working and middle class, as well as their families.

According to Sanders, America’s working class is struggling, and that means we need people in Congress, supposedly like Lee, who will stand up for their rights and fight to make their lives better. Now, to be sure, America’s working class is struggling a bit, as the economy is in dire straits, and we have a president who only seems interested in raising taxes and gas prices. And having better representation in Congress would be great.

However, representatives who believe that capitalism is wrong, as Sanders supposedly does, may not be the right way to go about this.

I mean, these are people that believe wealth is essentially a plague on our nation and one that is robbing us blind. If those like Sanders and Lee were in charge, we’d all be living in the same type of home, driving the same cars, making the same amount of money, working a government-funded job, and sending our kids to learn in socialist taught schools where dreams are squashed, and the lesson of every day is that you are just a number to serve the greater good.

Meanwhile, those like Sanders would still be living on cloud nine.

I say still because, while Sanders will boast of socialistic “equality” from the rooftops, he is, in fact, one of the top one percent he’s always complaining about. The man has a total of three different homes and is a millionaire by definition, having a net worth estimated around $2 million, according to a 2019 Politico piece.

And now, he’s flying first class like it’s his job.

Now, I’m not saying Sanders actually paid for a first-class seat. He could have just been upgraded for some reason or another. The thing is that he took it, though. Even the much more centrist Barack Obama made a big deal of refusing to ride first class and giving rise to the wealthy before becoming president.

So much for despising the wealthy, huh?