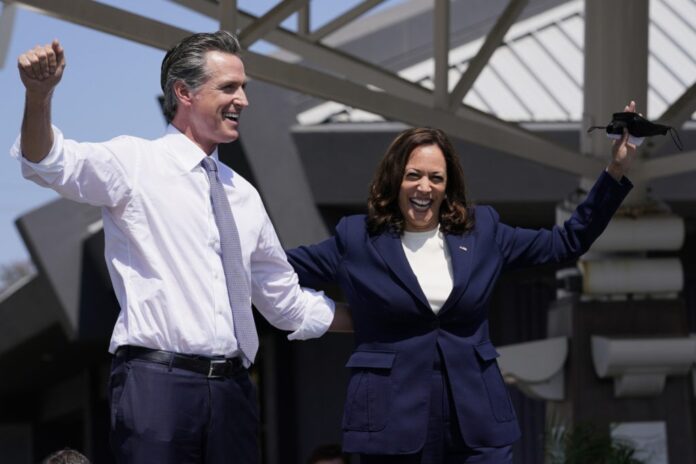 Newsom’s comments came during an interview with the San Francisco Chronicle editorial board. The board asked Newsom, who is running for a second term this mid-term election cycle, “if he would promise to voters that he wouldn’t run for president before the end of that term,” which would expire in 2027.

“Yeah, I mean, I have sub-zero interest. It’s not even on my radar,” he said, adding that Harris, who has drawn criticism regarding her performance as vice president, should succeed President Joe Biden, the Chronicle noted.

“I’m hopeful that she’s the next president of the United States,” he said.

Newsom’s support of Harris comes at a time when Harris’s approval rating has plummeted below that of Biden’s, a recent Trafalgar poll showed. Just 28 percent of respondents approve of how “Harris is handling her job,” while 62 percent of those polled said they disapprove, Breitbart News reported. Of participants, 39 percent approve of Biden while 55 percent disapprove.

Harris’s terrible polling is bad news for any presidential aspirations she may have. Perhaps one of the reason’s [sic] why her polling is so terrible is that she has had numerous communications gaffes and has failed to prevent the southern border invasion.

Last year, Biden tasked Harris with stemming the flow of migrants. But one year later in March 2022, more than 221,300 illegal migrants were encountered crossing the U.S.-Mexico border. That number represents a new high for the Biden administration and the worst month since the Department of Homeland Security was founded in 2002, according to the Republican National Committee’s research team. March’s number was also the third-highest on record.

Harris and Newsom’s political careers follow somewhat similar arcs, dating back to their time working in leadership roles in San Francisco since 2004. Ballotpedia notes Newsom assumed the city’s mayorship that year while Harris was sworn in as district attorney. The duo worked together in the city government until 2011, when they took on high-ranking roles at the state level. Newsom served as California’s lieutenant governor from 2011 to 2019, while Harris served as the state’s attorney general from 2011 to 2016. The Chronicle pointed out that they share donors in the Golden State.