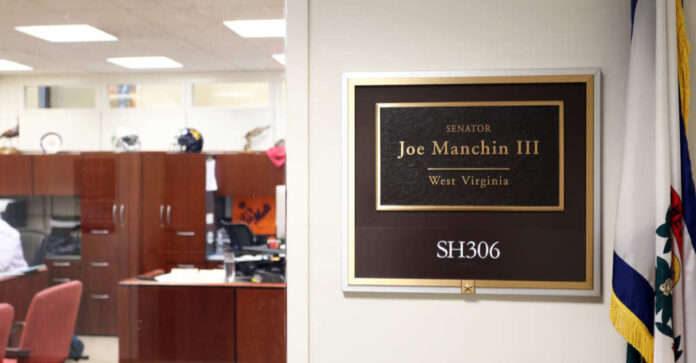 For the last 30 years or so politicians have been playing the game of party over people. If it helps the party and advances their agenda further then they will gather behind it as if it’s the second coming of Christ. If it benefits the people first, and the party isn’t being given recognition for the idea, then they will refuse to back it. People like Sen Joe Manchin (D-WV) are trying to end that tradition, and it’s driving the Dems insane.

President Biden has already developed his keystone bill. It has nothing to do with his campaign promises for free college, legalization of marijuana or truly helping our Veterans. Instead, this $2 trillion bill focuses on climate change, childcare, healthcare, and to a degree the infrastructure of the nation among other things. Unlike the rest of the party Sens. Manchin and Krysten Sinema (D-AZ) have been standing up and refusing to vote for the bill. Sen. Manchin is even more fiercely determined to ensure this doesn’t blindly pass.

An anonymous source spoke with NBC News about getting this bill passed with Manchin’s support and it’s surprisingly easy. “The best approach would be for the White House to come up with a plan, get his approval, and then hand it off” with Democratic congressional leadership “to keep everybody in line. He’s not going to write a partisan bill. That’s not who he is.” Yet this idea has evaded Biden and his cabinet so far. Either nobody has the spine to ask him about it in this way, or they fail to make the push for him to make the edits he wants to see.

Manchin has been vocal about his concern with the federal debt and inflation when it comes to this bill. He is not ready to just put the American taxpayer into further debt so they can give a child tax credit, or to battle climate change that is not occurring here like many leftists would love the American people to believe. He wants to see the money spent in responsible ways, and not just by issuing blank checks as the US has done in the past.

When he first announced his opposition to the bill, Manchin indicated he was open to discussing the ideas of where the bill could go and trying to find common ground. One of his biggest sticking points has been the inclusion of controlled climate and healthcare spending, including the Obamacare subsidies, as well as narrowing the Medicare gap. This seems to have shifted course.

In the last month a political ad for Rep David McKinley came out, and it challenged that thought process about Sen. Manchin. Appearing in the ad, he boasted about his opposition to the bill and showed an unusual level of support for the Republican, but it also underscored one of Sen. Manchin’s key beliefs, people over party. He sees what Rep. McKinley is trying to do for the people of WV. He knows the challenges the state faces, just like Sen. Manchin does. So it’s not a big surprise he is onboard with fixing everything up and making it right.

With the Democrats looking likely to lose their control of Congress in the November midterm elections, they need to find a way to reach Sen. Manchin soon. Their ego and inability to talk to people on a relatable level, and to compromise is the main complication for the party, and in getting this bill passed. Given the inflammatory language, it contains; the setup to make it easy to get on, hard to get off, and impossible to pay for; and the ballooning costs if they don’t stop it in time; this is an impossible bill that Sen. Manchin is wise to try and block. It could easily kill our economy in a way even liberals don’t want to imagine.