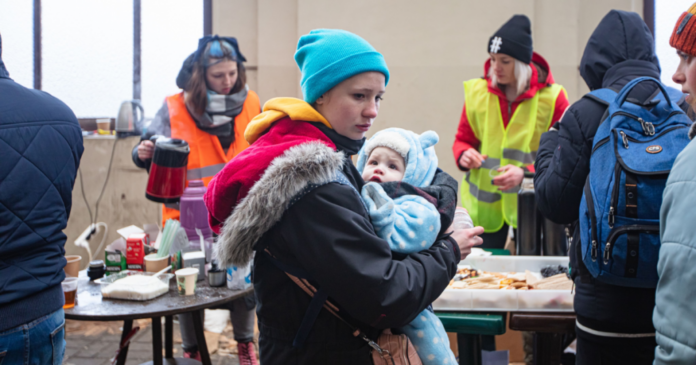 Marianna Vyshemirsky found herself in a unique position as the conflict between Ukraine and their Russian invaders intensified. Before the Russian invasion began, Vyshemirsky made a living as a beauty blogger, and her husband worked at the Azovstal steelworks. Their life was going great, and a baby was on the way. Then an airstrike rocked the maternity ward where she was staying.

As she and the other pregnant women were being relocated, members of the Associated Press came in and started snapping photos. Some of Vyshemirsky bloodied and wrapped up leaving, some of her as she emerged after being allowed to go back to retrieve her things for the baby. While her beauty blogs had made her relatively famous by Ukrainian standards, these images took her viral mere hours after they were taken.

However, along with fame comes drama. The Russian Kremlin and its supporters sought out the opportunity to put a target on her back. Biting off her pre-existing fame for her blogs, they tried to use this status to claim her as an actor. Putting the image of her leaving the ruins of their airstrike with a look of utter shock on her face alongside an earlier posed image of her being incredibly happy and showing off baby clothing. This kind of contrast isn’t difficult to find, and with the events in Ukraine as of late it isn’t hard to see where it’s coming from.

With Russian diplomats claiming she was an actor playing two different people, it was a matter of time until they got their citizens and supporters to turn against her. The press had chosen two distinct images of her to run for telling the story of an airstrike. The first one was of Vyshemirsky leaving the building after the airstrike. Blood on her head, wrapped in blankets, and her eyes were bloodshot as she looked toward the camera. The next was her descending the staircases after retrieving the items she had from the maternity ward for her baby. The images were too staged for the Russian’s tastes, and they were certain that she was not actually who they claimed she was.

“I received threats that they would come and find me, that I would be killed, that my child would be cut into pieces…She chose to show up at a difficult time, but it’s better she arrived under these circumstances than not at all.” This kind of positive outlook has made survival despite these threats easier for the new mother. The Kremlin’s attempts to use a photo of another woman on a stretcher who is obviously not her to discredit Vyshemirsky’s experience is disturbing. Especially when you learn that the woman, as well as her unborn child, did not survive their injuries.

Vyshemirsky did not see the photos immediately. With the few days that had passed until she saw them go viral, she found herself flooded with threats, lies, and judgments against her and her family. She was appalled at the insults thrown her way and was upset with the press. “I was offended that the journalists who had posted my photos on social media had not interviewed other pregnant women who could confirm that this attack had really happened.”

That being said, she acknowledges that she can see how some people “got the impression that it was all staged.” She sees how her being one of the last ones to be evacuated from the building and the timing of the AP showing up with cameras can make it seem staged. Thankfully this woman’s history as a beauty blogger seems to have prepared her for these kinds of harsh words, and with the new baby, she has something to look forward to. In the meantime, the Russians will continue their threats, and she will be ready to refute their accusations.