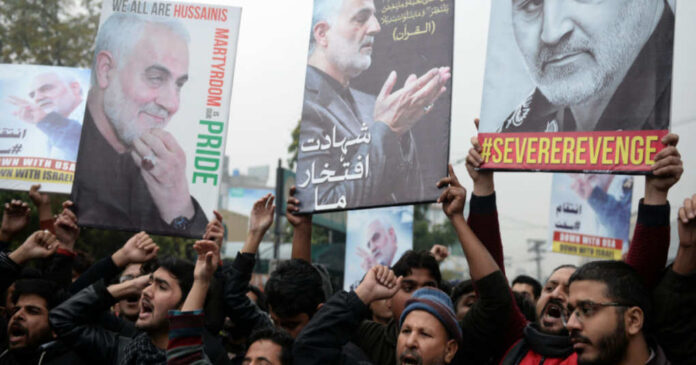 The thought of 33 people being crushed to death in a building collapse is tragic no matter where it happens. Even in Iran where we Americans aren’t as compassionate towards a culture that would just as soon annihilate us as to look at us. That’s where it happened, and the Iranian government has some angry citizens on its hands.

The result is that we’re hearing voices we never get to hear. The voices of the commoners who aren’t thrilled with their government’s response to the disaster, so in an unprecedented move, are speaking out in volumes. They’ve had enough.

Supreme Leader Ayatollah Ali Khamenei sent an emissary to speak to the crowd of ever-increasing protestors gathered in front of the rubble, but his presence wasn’t received well.

As Ayatollah Mohsen Heidari AleKasir stood in front of the collapsed 10-story building attempting to address the unaddressable crowd, he was booed and cursed.

Clearly perplexed, the ayatollah asked one of his bodyguards, “what’s happening?” The bodyguard whispered something in his ear before he resumed trying to speak.

“My dears, please keep calm, as a sign of respect to Abadan, its martyrs, and the dear (victims) the whole Iranian nation is mourning tonight,” he said. His words were met by the entire crowd screaming “shameless” at him.

As the emissary was being verbally assaulted by every single person in the unruly mob at once, out came the billy clubs and tear gas as Khamenei’s riot police, who were closely standing by, descended upon them, showing little to no mercy.

The general Iranian public is already in a tizzy over inflation, and in particular, rising food costs, and the government’s failure to address its crumbling infrastructure and deteriorating cities pushed them to the brink when the building fell.

They’re also sweating heavily over Iran’s nuclear deal with other world powers coming quickly unglued. The citizens of Iran are intelligent enough to realize how the deal first and foremost protects them, and they fear that Khamenei’s overinflated ego will cause him to start something he can’t finish by firing first.

At this point, the increasing crowd is a ragtag group of screamers with no direction and no one to guide them. But this is changing. Arab tribes from around the region are jockeying their camels to join them and this isn’t sitting well with the government that’s trying to thwart this thing before it erupts fullscale.

Adding to the tension among Iranian citizens is their illustrious leader’s recent decision to command the nation’s paramilitary Revolutionary Guard to seize two Greek oil tankers for no apparent reason. This only served to increase tensions between Iran and the West, placing them, the citizens, in danger of retaliation.

In a way, it’s kind of nice to see that the good old U.S. of A. isn’t the only nation with its fair share of troubles, but you also have to admit, it takes massive gonads for Iranian citizens to speak out against things they don’t like as is our customary habit of doing.

Perhaps the best strategy of the West would be to let Iran destroy itself from within by just laying low for a while. We already know we don’t like Supreme Leader Ayatollah Ali Khamenei so let’s see who we get next. Couldn’t be any worse.