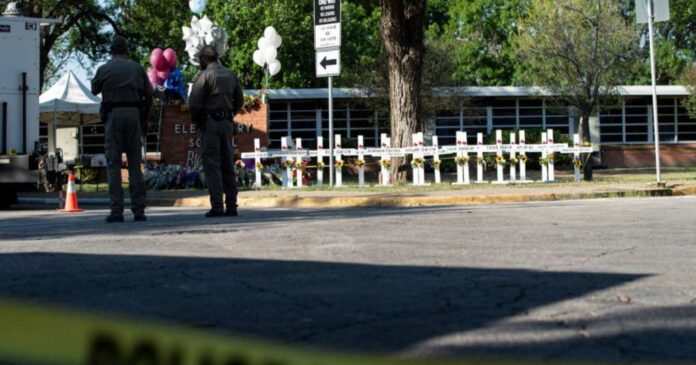 The United States Department of Justice sent a warning signal to the police of Uvalde, Texas. This was the police department that responded to the mass shooting at the Texas elementary school last week. Anger is rising national wide over the question of why armed officers waited more than one hour before entering the classroom where the gunman killed 19 children and two teachers while wounding others.

According to the Department of Justice (DOJ), they will conduct a “critical incident review” of the action taken by the law enforcement of the south Texas community.

Anthony Coley is the spokesperson for the DOJ, he indicated that the goal of the review was to provide an independent account of the actions and responses the police made that day. They also want to identify any things that could be learned from the day so that other first responders could do more in an active shooter event.

According to Coley, the mayor of Uvalde, Don McLaughlin, asked for the review from the DOJ.

Pedro Arredondo, the chief of police in that school district, was in command at the mass shooting. Some state officials have already indicated that not storming into the classroom where the gunman was barricaded was “the wrong decision.” He has not been seen by the media and has been under police protection since Sunday.

Roland Gutierrez, a Democratic state senator who represents Uvalde, said that mistakes made in the response could have contributed to more deaths in the school. He spoke with the mother of one child who died from a single gunshot wound.

Guitierrez told CNN on Sunday morning that a first responder he talked to said that the child most likely bled out in the 30 or 40 minutes after he was shot. They believe that the young girl could have lived if attended to earlier.

“So many things went wrong, here. At the end of the day, everybody failed, we failed these children.” He included lawmakers in that statement who failed to pass stricter gun laws.

Salvador Ramos, the 18-year-old who committed the horrendous act at Robb elementary school, reportedly made violent threats on social media and talked about guns. He bought the assault rifle and hundreds of rounds of ammunition that he used in the shooting legally.

While he was barricaded in the classroom with children and their teachers, one child was able to make six calls to 911 and beg for help from the police. The officers were right outside the classroom the whole time.

Gutierrez is asking questions about both the timeline of actions and who was really in charge of the response from law enforcement. When police finally stormed into the classroom, it was agents from the border patrol who did it. The Uvalde police department or the part-time tactical Swat team from the community did not respond.

This is not the state protocol to “confront the attacker” rapidly.

Law enforcement criticism came from both sides of the political aisle. Dan Crenshaw, a Republican congressman, and former Navy Seal told CNN, “the fact that it took border patrol an hour later to come in and actually do the job for the police is pretty embarrassing. It does seem clear protocols weren’t followed. So, let’s let the investigation play out, but it’s hard not to see how someone doesn’t get fired for this, for these very, very bad calls.”

The leader of the texas department of public safety, Steven McCraw, admitted that waiting to rush into the classroom was “the wrong decision.”

Lydia Torres is a neighbor of Police Chief Pedro Arredondo. She told the New York Post that Arredondo is “a coward.” She said he did not do his job, he failed the children, and he is hiding in his home being guarded by his police.